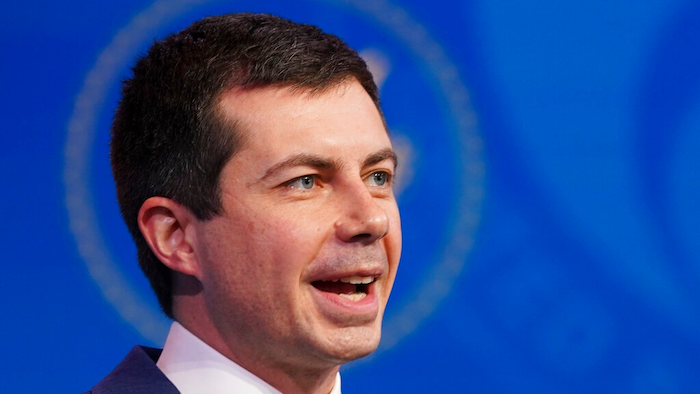 “We need to build our economy back, better than ever, and the Department of Transportation can play a central role in this,” the 39-year-old former mayor of South Bend, Indiana, intends to tell the Senate Commerce Committee, according to prepared remarks for his confirmation hearing Thursday.

“You have my commitment that I will work closely with you to deliver the innovation and growth that America needs in this area,” he said in the remarks.

A former Democratic presidential rival whom Biden praised for bringing fresh ideas, Buttigieg would be the first openly gay person confirmed by the Senate to a Cabinet post. He was among the first batch of Cabinet selections getting hearings this week as Biden urges the new Democratic-led Senate, which holds the slimmest majority, to quickly confirm his nominees.

Buttigieg would take over at a critical time for transportation, charged with implementing Biden’s proposals to spend billions of dollars making major infrastructure improvements and on retrofitting initiatives that can help the U.S. battle climate change.

The coronavirus pandemic has devastated many modes of transportation, with airlines, city subway systems and Amtrak seeking federal aid to help keep afloat.

The Biden administration also is likely to reverse course on some of President Donald Trump’s moves to loosen Obama-era auto emissions regulations, while also monitoring the Boeing 737 Max’s return to the skies following safety concerns.

“Good transportation policy can play no less a role than making possible the American Dream, getting people and goods to where they need to be,” Buttigieg said. “But I also recognize that at their worst, misguided policies and missed opportunities in transportation can reinforce racial and economic inequality, by dividing or isolating neighborhoods and undermining government’s basic role of empowering Americans to thrive.”

“So much is at stake today,” he said.

Biden also wants to immediately mandate mask-wearing on airplanes and public transportation systems to slow the spread of the coronavirus, and Buttigieg made clear that would be a first priority at the department.

“We must ensure all of our transportation systems — from aviation to public transit, to our railways, roads, ports, waterways, and pipelines — are managed safely during this critical period, as we work to defeat the virus,” he said.

Still, it’s Biden’s infrastructure plan, the full details of which are expected to be released next month, that is likely to draw heavy attention and pose the biggest challenges, such as cost. Biden has yet to specify how he intends to pay for new infrastructure spending.

Beyond standard transportation fixes, which are easier to promise than for administrations to get through Congress, Biden wants to rejuvenate the post-coronavirus pandemic economy and create thousands of green jobs by making environmentally friendly retrofits and public works improvements.

In his prepared remarks to the committee, Buttigieg pointed to his past experience as a veteran of the Afghanistan war as well as city mayor as valuable in taking a ground level approach to improving transportation. He described initiating a “smart streets” program to make South Bend’s downtown more pedestrian- and bicyclist-friendly while spurring hundreds of millions of dollars in economic investment.

“I worked with regional and state partners — and across the aisle — to support enhancements to our inter-city train system and our now-international airport, and we pioneered public-private partnerships,” he said. “We achieved results by bringing people in, engaging stakeholders and residents, prioritizing limited funds effectively, and unlocking new resources to solve problems.”

“That’s how I will approach the Department of Transportation, if confirmed,” Buttigieg said.

During his four years in the White House, Trump’s administration often held “Infrastructure Week” events and touted transportation improvements. But it was not able to push Congress to pass any broad plan to update the nation’s roads and bridges, rails and airports.

IEN Unboxed is a new show in which our editors unbox new tools on the market and discuss their features.
Mar 2nd, 2021