But a resurgence in the coronavirus is expected to slow growth sharply in the current quarter. 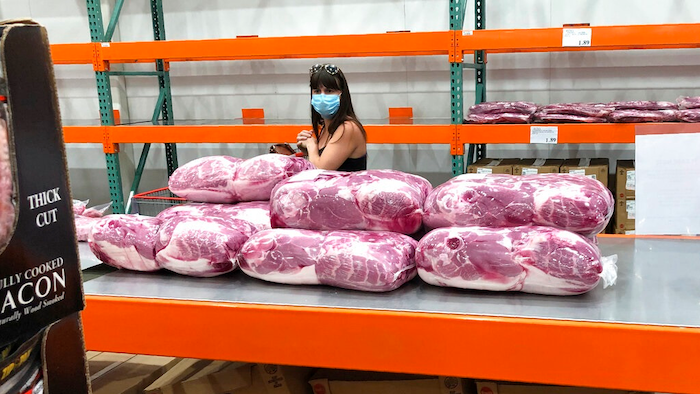 A shopper in a face mask looks over cuts of beef piled up in a cold room for purchase at a Costco warehouse store Tuesday, May 5, 2020, in west Denver. The U.S. economy rebounded at an even-stronger pace in the July-September quarter than first reported but a resurgence in the coronavirus is expected to slow growth sharply in the current quarter with some analysts even raising the specter of a double-dip recession.
AP Photo/David Zalubowski

WASHINGTON (AP) — The second of three estimates on U.S. growth for the July-September quarter was unchanged at a record pace of 33.1%. But a resurgence in the coronavirus is expected to slow growth sharply in the current quarter with some economists even raising the specter of a double-dip recession.

While the overall increase in the country’s total output of goods and services was static, the Commerce Department reported Thursday, some components were revised.

Still, the economy has not fully recovered from output lost in the first six months of the year when GDP suffered a record-shattering drop of 31.4% in the second quarter. That followed a slide at an annual rate of 5% in the first quarter as when the pandemic shut down much of the economy and triggered millions of layoffs.

Economists are concerned that growth has slowed sharply in the current October-December and there are fears that GDP could dip back into negative territory in the first three months of next year.

Mark Zandi, chief economist at Moody’s Analytics, said he had forecast GDP growth of around 2% in the fourth quarter, with the real possibility of GDP turning negative in the first quarter of next year.

Economists at JPMorgan Chase have trimmed their forecast for the first quarter to a negative 1% GDP rate. “This winter will be grim and we believe the economy will contract again in the first quarter,” the JPMorgan economists wrote in a research note.

“The economy is going to be very uncomfortable between now and when we get the next fiscal rescue package,” Zandi said. “If lawmakers can’t get it together, it will be very difficult for the economy to avoid going back into a recession.”

While lawmakers have returned for a lame-duck session, there has been no progress so far in narrowing the differences between Democrats who are pushing for a big package of $1 trillion or more, and Senate Republicans who are refusing to approve anything above approximately $500 billion.

More than 9 million people will lose their unemployment benefits at the end of the year when two jobless benefit programs are set to expire unless Congress extends them.

At the same time virus cases are surging, triggering a number of states to re-impose business limits such as earlier closing times for bars and restaurants and stricter limits on the number of in-store shoppers.