US Unemployment at 14.7%; Highest Since Depression

The losses reflect what has become a severe recession caused by sudden business shutdowns in nearly every industry. 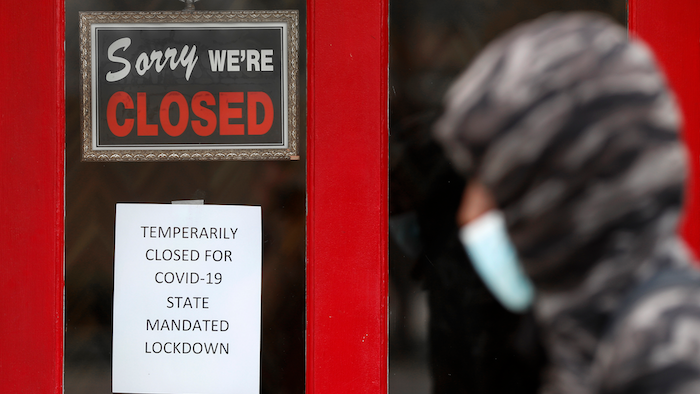 A pedestrian walks by The Framing Gallery, closed due to the COVID-19 pandemic, in Grosse Pointe, MI on Thursday, May 7.
AP Photo/Paul Sancya, File

WASHINGTON (AP) — The U.S. unemployment rate rocketed to 14.7% in April, a level last seen during the Great Depression, as 20.5 million jobs vanished in the worst monthly loss on record — stark evidence of how the coronavirus has brought the economy to its knees.

The breathtaking losses, reported by the Labor Department on Friday, are certain to intensify the push-pull over how and when to ease the coast-to-coast shutdowns of factories, stores, offices and other businesses. And they rob President Donald Trump of the ability to point to a strong economy as he runs for reelection.

“The damage that we’re seeing from the great coronavirus recession is traumatic,” said Gregory Daco, chief U.S. economist at Oxford Economics. "It's going to take a long time before the labor market recovers to its pre-recession state.”

Stocks rallied on Wall Street in the morning when it turned out the report wasn't quite as horrific as economists had forecast. The Dow Jones Industrial Average gained more than 300 points, or 1.3%.

Worldwide, the virus has infected more than 3.8 million people and killed nearly 270,000, including over 75,000 in the U.S., according to a tally by Johns Hopkins University based on official data.

The unemployment report indicated that the vast majority of April’s job losses — roughly 75% — are considered temporary, a result of businesses that were forced to suddenly close but hope to reopen and recall their laid-off workers.

Whether most of those workers can return anytime soon, though, will be determined by how well policymakers, businesses and the public manage their response to the health crisis. Economists increasingly worry that it will take years to recover all the jobs lost.

The collapse of the job market has occurred with stunning speed. In February, the unemployment rate was at a more than 50-year low of 3.5%, and employers had added jobs for a record 9 1/2 years. In March, unemployment was just 4.4%.

“In just two months the unemployment rate has gone from the lowest rate in 50 years to the highest rate in almost 90 years," said Gus Faucher, chief economist at PNC Financial. 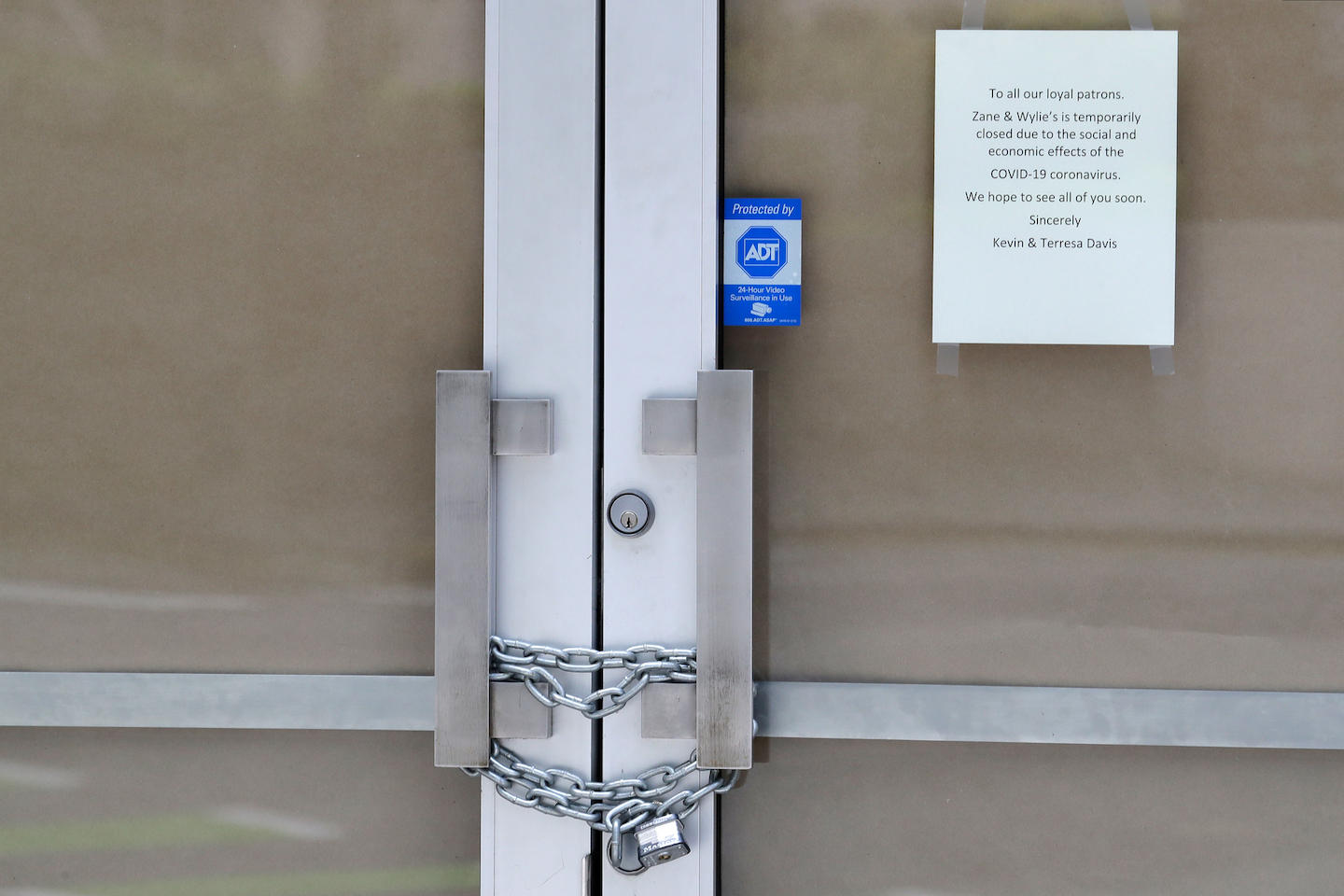 In this May 6 photo, a chain lock is shown on the entry doors to Zane + Wylie's Seattle Steakhouse restaurant in downtown Seattle.AP Photo/Ted S. Warren

The last time unemployment was this high was 1939, at the tail end of the Depression. Unemployment peaked at 25% during the decade-long slump.

Nearly all the job growth achieved during the 11-year recovery from the financial meltdown has now been lost in one month.

As bad as the numbers are, they don't capture the full devastation wrought by the business shutdowns.

The Labor Department said its survey-takers erroneously classified millions of Americans as employed in April even though their employers had closed down. If they had been counted correctly, the unemployment rate would have been nearly 20%, the government said.

Also, people who are out of work but aren't actually looking for a new job are not officially counted as unemployed. An estimated 6.4 million people lost jobs last month but did not search for new ones, most likely because they saw little prospect of finding work with the economy shut down.

Counting them as unemployed would push the rate up further, to 24%, according to calculations by Heidi Shierholz, an economist at the Economic Policy Institute.

Trump, who faces the prospect of high unemployment rates through the November elections, said the figures were “no surprise.”

“What I can do is I’ll bring it back,” he said. “Those jobs will all be back, and they’ll be back very soon. And next year we’ll have a phenomenal year.”

However, the nonpartisan Congressional Budget Office has projected that the jobless rate will still be 9.5% by the end of 2021.

The federal government is dispensing nearly $3 trillion to help households and businesses pull through the crisis, including $1,200-per-person relief checks and an extra $600 in weekly unemployment benefits.

Though some businesses are beginning to reopen in certain states, factories, hotels, restaurants, resorts, sporting venues, movie theaters and many small businesses are still largely shuttered.

Trump has pushed aggressively to get businesses up and running again amid warnings from health experts that easing up too soon could lead to a deadly second wave of infections. As Election Day nears, the president will be judged by how he handles not just the economic crisis but the health one.

One of the newly unemployed, Sara Barnard, 24, of St. Louis, has lost three jobs: floor manager at a pub and restaurant, bartender at a tavern and occasional stand-up comedian.

“I’m usually a very busy person,” Barnard said. “So all this down time is awful. I’d rather be working. I miss the social interaction.”

The health disaster has taken a heavy economic toll around the world.

Unemployment in the 19-country eurozone is expected to surpass 10% in coming months as more people are laid off. That figure is expected to remain lower than the U.S. unemployment rate, in part because millions of workers in Europe are staying on the payrolls with the help of government aid.

In France, about half the private-sector workforce is on a government paid-leave program whereby they receive up to 84% of their salary. In Germany, 3 million workers are supported in a similar system, with the government paying up to 60% of their pay.

Over the past seven weeks, an estimated 33.5 million American workers have filed for unemployment benefits. Friday's job report is a different figure. It captures just five weeks, it is based on a mid-April survey of businesses and households, and it is a net figure — that is, it takes into account the hiring that some companies, such as Amazon and many grocery stores, have done.

Applications for unemployment benefits, while high, have declined for five straight weeks, a sign that the worst of the layoffs has passed. But few economists expect a rapid turnaround.

Harvard economist Raj Chetty said the economy’s health will hinge on when the outbreak has subsided enough that most Americans will feel comfortable returning to restaurants, bars, movie theaters and shops.

Small businesses are hanging on in hopes that spending and the economy will rebound soon, he said, but “there’s only so long you can hold out.”

Minorities and poor people have suffered the most from the economic shutdown. Job losses were especially severe among Latinos, whose unemployment rate leaped to 18.9% from 6% in March. The African-American rate jumped to 16.7%, while for whites it rose to 14.2%.

Almost half the 14 million U.S. hotel and restaurant workers lost their jobs last month. But losses have spread to nearly every industry, with even health care shedding 1.4 million jobs, nearly all of them from doctors’ and dentists’ offices, as Americans have cut back on all but necessary visits.

In addition to the millions of newly unemployed, 5.1 million others had their hours reduced in April.