A report released Monday showed that the trade conflict is contributing to further deterioration in the manufacturing sector, which includes many small businesses. 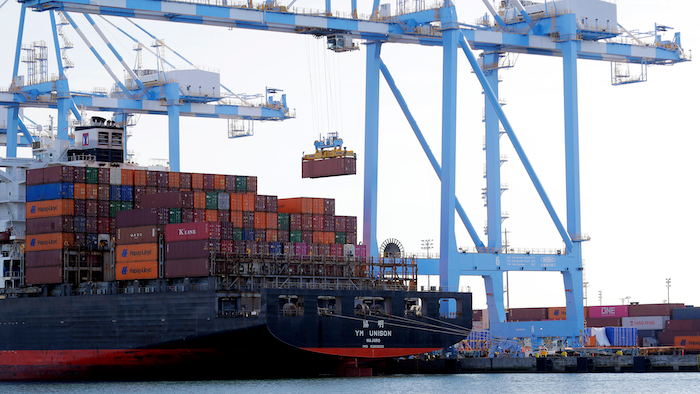 In this Nov. 4, 2019 photo, cargo cranes are used to take containers off of a Yang Ming Marine Transport Corporation boat at the Port of Tacoma in Tacoma, WA.
AP Photo/Ted S. Warren, File

That’s one of the findings of a Bank of America survey of owners taken during July and August and obtained by The Associated Press. Forty-four percent of the 1,323 owners surveyed said their businesses have been affected by the administration’s trade tariffs and policy. That was up from 41% in a survey taken during the spring and 36% in a survey released a year ago. In the latest survey, nearly a fifth of the owners said tariffs and trade policy had a negative impact on their companies, up from 18% in the spring, and 16% reported a mixed impact, up from 14%.

Separately, a report released Monday showed that the trade conflict is contributing to a further deterioration in the manufacturing sector, which includes many small businesses. The Institute for Supply Management, an industry organization for corporate purchasing executives, said its index of manufacturing activity fell to 48.1 in November from 48.3 in October. Any reading below 50 signals a contraction in manufacturing; the index has fallen since August.

New orders, production and hiring all dropped for the fourth straight month, the ISM said.

President Donald Trump has imposed tariffs on foreign steel, aluminum and thousands of goods from China. In the Bank of America survey, 61% said they were paying more for goods and supplies due to the tariffs. Fifty-five percent said they had to raise their prices because of the tariffs, and nearly a quarter said they had lost customers.

The survey also found that political environment and health care remain owners’ top economic concerns, each cited by 61% of those surveyed. They were followed by consumer spending, cited by 54%; the strength of the dollar, cited by 50% and interest rates, a concern for 48%.