The S&P CoreLogic Case-Shiller 20-city home price index climbed 2.7 percent from a year earlier, down from an annual gain of 3 percent in February. 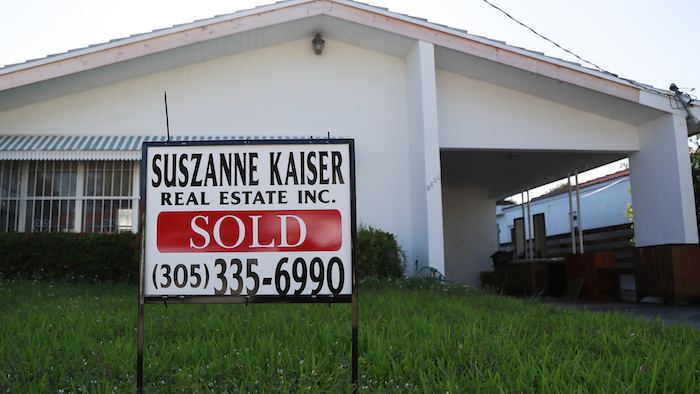 U.S. home prices rose at the slowest pace in more than six years in March, a sign weaker sales are keeping a lid on price increases.

The S&P CoreLogic Case-Shiller 20-city home price index climbed 2.7 percent from a year earlier, down from an annual gain of 3 percent in February.

Price gains in formerly red-hot cities such as Seattle and San Francisco have noticeably cooled. Nationwide, home price increases have run ahead of wage growth for five years, leaving many homes out of reach. That has slowed sales, forcing would-be sellers to rein in price increases.

The 20-city price index has fallen sharply from a year ago, when it increased 6.7 percent. Seattle's home prices rose 1.6 percent in March from a year ago, down from a 13 percent gain in March 2018. Prices in San Francisco rose just 1.4 percent. The biggest increase was in Las Vegas, at 8.2 percent, followed by Phoenix, at 6.1 percent.

Sales of existing homes slipped in April and are 4.4 percent lower than they were a year earlier.

"Buyers have hit a breaking point in what they're willing to pay, even with low mortgage rates and even in places where incomes are high," said Matthew Speakman, an economic analyst at real estate data firm Zillow.

David Blitzer, Chairman of the S&P Dow Jones Indices, said that the solid economy should be supporting healthier sales. Mortgage rates are low, at about 4 percent, the unemployment rate is at a nearly 50-year low, and wage increases are picking up.

"Given the broader economic picture, housing should be doing better," Blitzer said. "The difficulty facing housing may be too-high price increases."

Even with the smaller increase in March, home prices are still rising more quickly than inflation, which increased 2 percent in April from a year ago.

Some cities are still seeing solid gains in the past year: Prices in Tampa rose 5.3 percent, in Atlanta 4.7 percent, and in Denver 4.3 percent. But many big cities also saw small increases, with home prices in San Diego and Los Angeles both up just 1.3 percent and in Chicago 1.8 percent.

Main image: In this April 12, 2019, file photo, a sold sign is shown in front of a home in Surfside, Fla. On Tuesday, May 28, the Standard & Poor's/Case-Shiller 20-city home price index for March is released. (AP Photo/Wilfredo Lee, File)