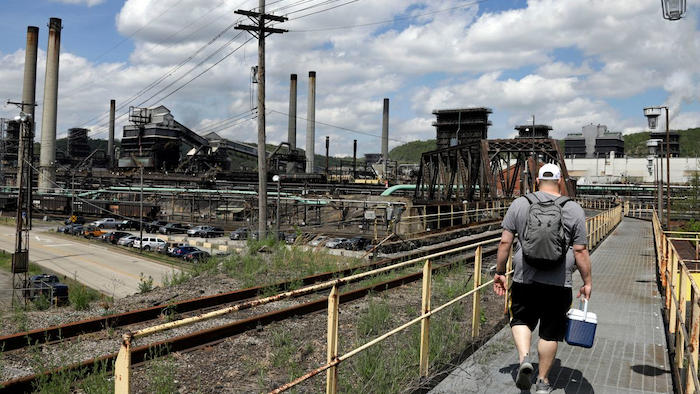 Led by declines in production-related indicators, the Chicago Fed National Activity Index (CFNAI) fell to –0.45 in April from +0.05 in March. Three of the four broad categories of indicators that make up the index decreased from March, and two of the four categories made negative contributions to the index in April. The index’s three-month moving average, CFNAI-MA3, moved down to –0.32 in April from –0.24 in March.

Employment-related indicators contributed +0.04 to the CFNAI in April, up slightly from +0.03 in March. The civilian unemployment rate fell to 3.6 percent in April from 3.8 percent in March. The contribution of the personal consumption and housing category to the CFNAI moved down to –0.05 in April from a neutral value in March. On balance, consumption indicators weakened, pushing down the category’s overall contribution in April.

Main image: In this May 2, 2019, file photo a worker arrives for his shift at the U.S. Steel Clairton Coke Works in Clairton, Pa. On Wednesday, May 15, the Federal Reserve reports on U.S. industrial production for April. (AP Photo/Gene J. Puskar)