The goods deficit with China dropped 28.2 percent to $24.8 billion. 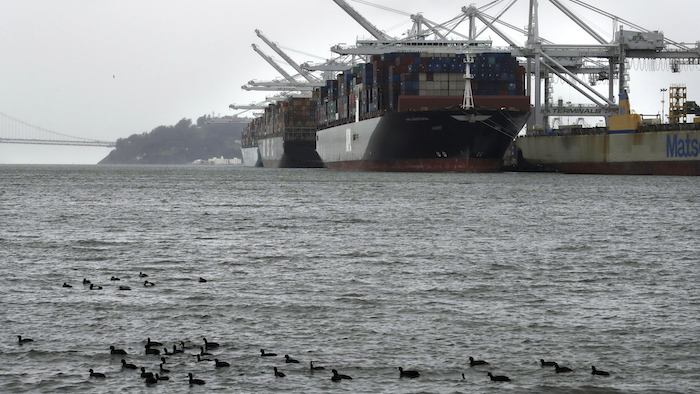 The U.S. trade deficit fell for the second straight month in February, and the politically sensitive deficit in the trade of goods with China narrowed.

The Commerce Department said Wednesday that the gap between the goods and services that the United States sells and what it buys from the rest of the world dropped 3.4 percent to $49.4 billion in February, the lowest since June. The deficit had slid 14.6 percent in January. Exports climbed 1.1 percent to $209.7 billion on a surge in shipments of civilian aircraft, passenger cars and medicine. Imports rose 0.2 percent to $259.1 billion.

President Donald Trump has imposed tariffs on $250 billion in Chinese imports in a fight over U.S. allegations that China steals U.S. technology and forces foreign firms to turn over trade secrets in exchange for access to the Chinese market. China has retaliated by targeting $110 billion worth of American products.

Trump campaigned on a pledge to reduce America's longstanding trade deficit with the rest of the world. He sees the gap as a sign of economic weakness and as the result of bad trade deals and abusive practices by America's trading partners.

In addition to targeting Chinese products, Trump has slapped tariffs on imported steel, aluminum, dishwashers and solar panels. And he is threatening to tax imported cars, too.

"Automakers may have been trying to rush U.S.-made units to their destinations just in case the Trump administration imposed tariffs on imported vehicles ... and set off a tit-for-tat motor vehicle trade war," Stephen Stanley, chief economist at Amherst Pierpont Securities, said in a research note.

A narrowing trade deficit adds to America's gross domestic product—the broadest measure of economic output. So after the trade numbers came out, economists were upgrading the outlook for U.S. economic growth. Stanley said he was likely to push his forecast for the first quarter above an annual rate of 2 percent, up from the 1.7 percent he'd penciled in before Commerce released the trade numbers.

Mainstream economists view trade deficits as the result of an economic reality unlikely to yield to changes in trade policy: Americans buy more than they produce, and imports fill the gap. The strong U.S. economy also encourages Americans to buy more foreign products.

U.S. exports are also hurt by the American dollar's role as the world's currency. The dollar is usually in high demand because it is used in so many global transactions. That means the dollar is persistently strong, raising prices of U.S. products and putting American companies at a disadvantage in foreign markets.

The U.S. has been much more competitive in the trade of services such as banking and education than in the trade of goods such as appliances and clothing. In February, U.S. services exports hit a record $70.1 billion, producing a services surplus of $22.6 billion. But America ran $72 billion deficit in goods.

Main image: In this March 6, 2019, file photo, container ships docked at the Port of Oakland wait to be unloaded in Oakland, Calif. On Wednesday, April 17, the Commerce Department reports on the U.S. trade gap for February. (AP Photo/Ben Margot, File)