Economic activity in the manufacturing sector expanded in March, and the overall economy grew for the 119th consecutive month. 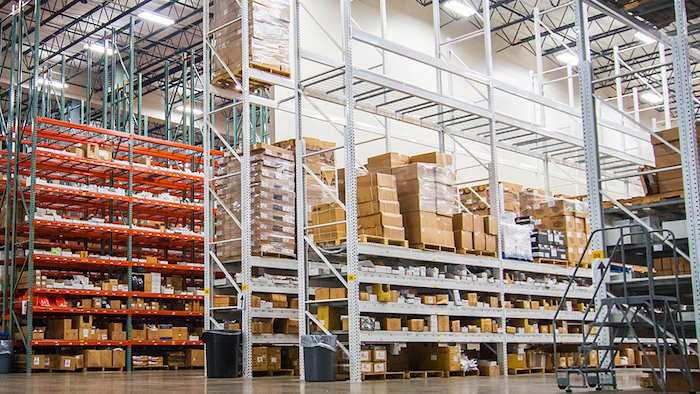 Economic activity in the manufacturing sector expanded in March, and the overall economy grew for the 119th consecutive month, say the nation’s supply executives in the latest Manufacturing ISM Report on Business.

Timothy R. Fiore, chair of the Institute for Supply Management Manufacturing Business Survey Committee says that the PMI was driven by the demand side: new orders, customer inventory, and backlog of orders.

New orders jumped up two points to 57.4 percent in March, which Fiore says is a respectable expansion. A New Orders Index above 52.5 percent, over time, is generally consistent with an increase in the Census Bureau’s series on manufacturing orders.

The backlog of orders is still at 50.4 percent and Fiore comments that it has been that way for four months and he would really like to see that number go up a little in order to support the new order input.

ISM’s Customers’ Inventories Index registered 42.7 percent in March, which is 3.7 percentage points higher than the 39 percent reported for February, indicating that customers’ inventory levels were considered too low. 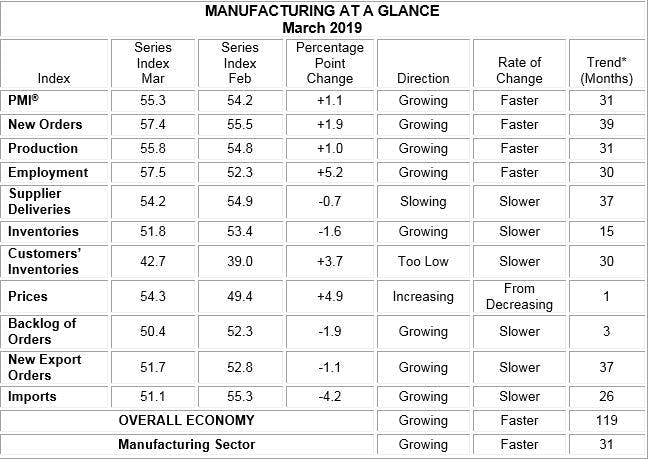 On the input side, however, Fiore says the numbers weren’t as impressive. “Supplier deliveries and inventory combined were a minus 2.3 point loss,” he explains. “It seems like suppliers are delivering faster, which is good from an operational standpoint, but not so good for the PMI number. The number shows an improvement in supplier delivery speed, and when you see that, you expect to see the inventory number pop up too, but it didn’t. It declined 1.6 points.”

ISM’s Employment Index registered 57.5 percent in March, an increase of 5.2 percentage points when compared to the February reading of 52.3 percent. This indicates growth in employment in March for the 30th consecutive month.

Fiore is most concerned about the level of new exports orders, commenting, “We’re still sitting there at low 50s. We haven’t seen levels that low since October 2016, and we’ve have six or seven month of steady decline.”

On the other hand, prices grew almost five points, which Fiore says makes him optimistic. “If they had stayed around 50, I wouldn’t be so optimistic about the demand from the supply side,” he explains. “But prices grew to almost 55, so there is price leverage, and overall that makes me feel like it was a good month.”

The monthly Manufacturing ISM Report on Business is based on the survey results of approximately 350 professionals across 18 different industry sectors. The report is released on the first business day of each month and features the PMI Index as its key measure. For more information on the Institute for Supply Management, visit www.ism.ws.