Total exports rose 9.1 percent from a year earlier to $217.6 billion, an improvement from December's 3.5 percent decline. 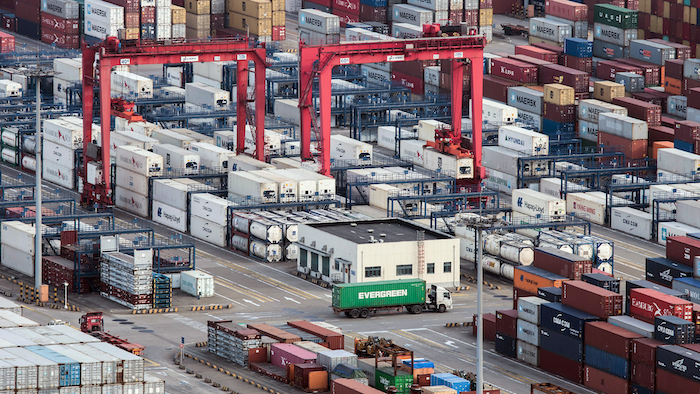 China's January exports rebounded from a contraction amid a tariff battle with Washington while Chinese purchases of U.S. goods plunged.

The data were announced Thursday as Chinese and U.S. negotiators began talks President Donald Trump says might decide whether he escalates a fight over Beijing's technology ambitions by going ahead with a March 2 tariff hike on $200 billion of imports.

The talks in Beijing this week may decide whether Trump allows another increase on $200 billion of imports from China to go ahead March 2.

Weakness in global demand for Chinese goods has increased pressure on the ruling Communist Party to make peace with Washington at a time when Beijing is trying to reverse an economic downturn. The government has warned Chinese exporters the global environment is "complicated and severe."

"The downbeat outlook for global growth means that this year is likely to be challenging for Chinese exporters, even if the ongoing U.S.-China trade negotiations culminate in a deal," said Julian Evans-Pritchard of Capital Economics in a report.

Chinese trade data early in the year are disrupted by the Lunar New Year holiday, which comes at different times in January or February each year. Factories rush to fill orders and then close for up to two weeks.

China's global trade surplus for January was $39.2 billion. The surplus with the United States was $27.3 billion.

Exports to the United States held up through much of 2018 despite Trump's tariff hikes, but fell 3.5 percent in December as the impact of the increases began to depress demand. Forecasters say American orders should slump this year.

Trump and his Chinese counterpart, Xi Jinping, agreed on December 1 to postpone additional tariff hikes by 90 days while they negotiated. But penalties of up to 25 percent already imposed on billions of dollars of each other's goods remain in place, raising the cost for American and Chinese buyers of soybeans, medical equipment, and other goods.

Trump is pressing Beijing to roll back plans for state-led creation of Chinese global competitors in robotics and other tech fields. Washington, Europe, and other trading partners complain such policies violate its market-opening obligations.

Chinese leaders are trying to reduce reliance on trade and nurture self-sustaining economic growth based on domestic consumer spending. But their plans call for keeping exports stable to avoid politically dangerous job losses.

Some companies have shifted production of goods bound for the United States out of China to avoid Trump's tariffs. Others are lining up non-Chinese suppliers of industrial components.