Japan Exports up in October, but Not Enough to Erase Deficit

Japan's trade deficit grew to its largest since July 2015 in October as a gain in exports was outpaced by a nearly 20 percent jump in imports. 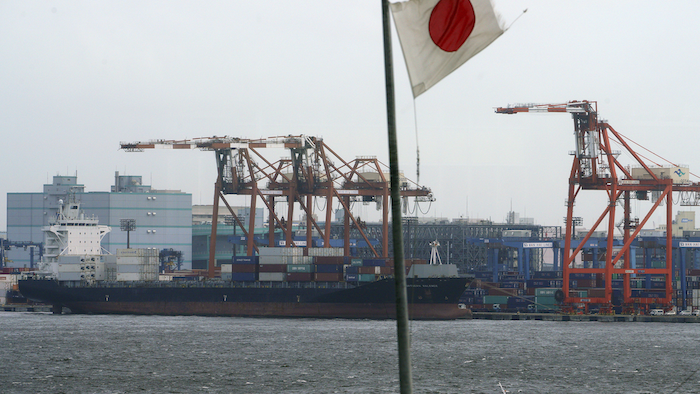 TOKYO — Japan's trade deficit grew to its largest since July 2015 in October as a gain in exports was outpaced by a nearly 20 percent jump in imports.

The Ministry of Finance said Monday that exports grew at an 8.2 percent annual pace. In September, exports had fallen 1.2 percent from the previous year in the first decline for the world's third-largest economy since 2016, largely due to natural disasters.

The politically sensitive trade surplus with the United States fell 11 percent to 573.4 billion yen ($5.1 billion) as Japan's imports from the U.S. jumped 34 percent, including imports of food, oil, steel and other metals and machinery. Exports to the U.S. grew nearly 12 percent, mostly in autos, machinery, medical products and rubber, to 1.43 trillion yen ($12 billion).

That may help ease trade tensions after President Donald Trump imposed penalty tariffs on billions of dollars' worth of Chinese exports.

China was Japan's biggest export market, taking shipments worth 1.48 trillion yen ($13 billion), a 9 percent increase over the same month a year earlier, while its imports from China jumped 16 percent to 1.9 trillion yen ($16 billion).

While trade with both China and the United States has remained resilient despite a tit-for-tat tariffs war between those two countries, overall trade recently has been a drag on growth and the outlook for exports is not promising, economists say.

Natural disasters have also taken a toll. That includes the closure of a major airport in the western Kansai area after a typhoon and a major earthquake that hit the northernmost island of Hokkaido, causing fatal landslides and widespread blackouts.

Prime Minister Shinzo Abe's deflation-fighting stimulus program of cheap credit has helped keep the economy growing for most of the past decade despite stagnation in domestic markets as the population ages and shrinks.

But further slowing of the Chinese economy or a global weakening in investment could cause broader damage, he said.

"We must remain cautious," he said.