President Donald Trump declared Tuesday that "Tariffs are the greatest!" and threatened to impose additional penalties on U.S. trading partners as he prepared for negotiations with European officials at the White House. 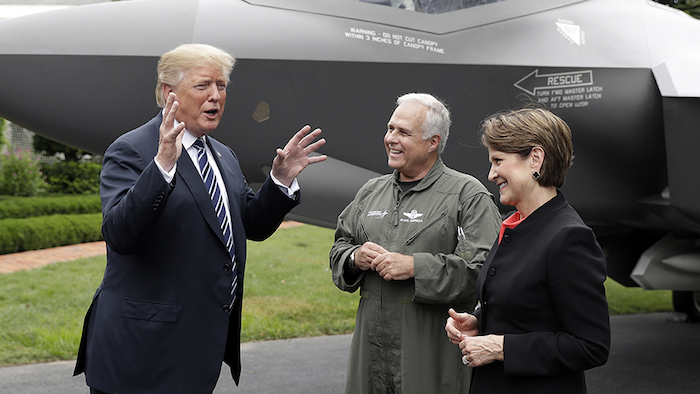 President Donald Trump talks with Lockheed Martin president and CEO Marilyn Hewson and director and chief test pilot Alan Norman in front of a F-35 as he participates in a "Made in America Product Showcase" at the White House Monday. (AP)

WASHINGTON (AP) — President Donald Trump declared Tuesday that "Tariffs are the greatest!" and threatened to impose additional penalties on U.S. trading partners as he prepared for negotiations with European officials at the White House.

Trump tweeted from the White House that U.S. trade partners need to either negotiate a "fair deal, or it gets hit with Tariffs. It's as simple as that."

The president has engaged in hardline trading negotiations with China, Canada and European nations, seeking to renegotiate trade agreements he says have undermined the nation's manufacturing base and led to a wave of job losses in recent decades. The imposition of punishing tariffs on imported goods has been a favored tactic by Trump, but it has prompted U.S. trading partners to retaliate, creating risks for the economy.

Trump has placed tariffs on imported steel and aluminum, saying they pose a threat to U.S. national security, an argument that allies such as the European Union and Canada reject. He has also threatened to slap tariffs on imported cars, trucks and auto parts, potentially targeting imports that last year totaled $335 billion.

And the president has already put tariffs on $34 billion in Chinese imports in a separate dispute over Beijing's high-tech industrial policies. Trump has threatened to ratchet that up to more than $500 billion, a move that has left financial markets uneasy. Beijing's retaliatory tariffs have hit American soybeans and pork.

Trump wrote on Twitter Tuesday that the U.S. is a "'piggy bank' that's being robbed." He noted that countries "that have treated us unfairly on trade for years" are coming to Washington to negotiate.

The president is meeting with European Commission President Jean-Claude Juncker on Wednesday. The U.S. and European allies have been at odds over the president's tariffs on steel imports and are meeting as the trade dispute threatens to spread to automobile production.