President Donald Trump says his tariffs on steel, aluminum and other goods will put U.S. companies and workers on stronger footing by winding back the clock of globalization with protectionist trade policies. But the steel tariff may backfire on the very people the president is aiming to help. 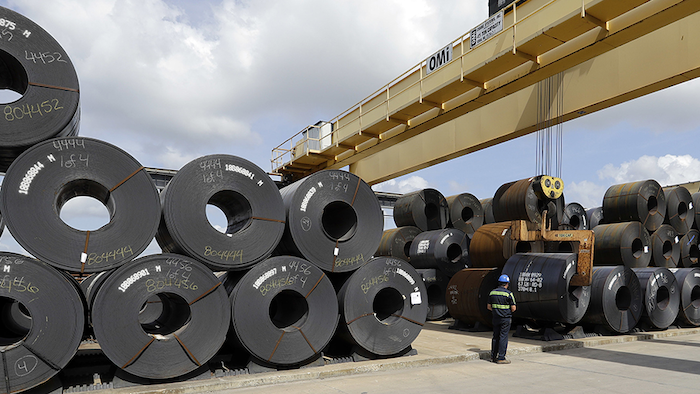 A roll of steel is unloaded at the Borusan Mannesmann Pipe manufacturing facility on June 5 in Baytown, Texas. (AP photo)

BAYTOWN, TX (AP) — Joel Johnson is fighting an uphill battle to keep his pipe factory in this refinery suburb east of Houston from becoming a casualty in President Donald Trump's bitter trade dispute with America's allies and adversaries.

He's the CEO of Borusan Mannesmann Pipe US, a company with Turkish roots that manufactures the specialized steel pipe used by energy companies to pull oil and natural gas out of the earth. Unless the Commerce Department grants its request to be exempted from Trump's tariff on imported steel, Johnson said, Borusan would face levies of around $30 million a year — a staggering sum for a company with plans to expand.

"We don't have any proof we're being heard," Johnson said.

Trump says his tariffs on steel, aluminum and other goods will put U.S. companies and workers on stronger footing by winding back the clock of globalization with protectionist trade policies. But the steel tariff — essentially a 25 percent tax — may backfire on the very people the president is aiming to help. The Commerce Department has been deluged with requests from 20,000 companies seeking exemptions.

In Bay City, Texas, 80 miles southwest of this refinery suburb outside Houston, global steel giant Tenaris churns out steel pipe in a $1.8 billion state-of-the-art facility that began operating late last year. Tenaris makes its seamless pipe from solid rods of steel called billets that are imported from its mills in Mexico, Romania, Italy and Argentina. It's also seeking to be excluded from the steel tariff.

"The decision is out of our hands," said Luca Zanotti, president of Tenaris's U.S. operations, while expressing confidence its request would be approved. If it's not? "We'll adapt," he said.

Steelworkers, meanwhile, are cheering the tariff even as they remain skeptical of Trump's pledge to empower blue-collar Americans. They also worry about the possibility of exemptions.

"You put these tariffs (in place) but now you're going to exclude everybody so they're kind of pointless," said Durwin Royal, president of United Steelworkers' Local 4134 in Lone Star, Texas.

The diverse views illustrate the complexity, confusion and concern lurking behind Trump's "America First" pledge. The steel tariff — essentially a 25 percent tax — may backfire on the very people the president is aiming to help.

Pipe mills are numerous in Texas, which leads the nation in oil and natural gas production. Mills that use imported steel typically do so when they can't get the exact type or quantity they need from U.S. producers. Many of them are among the thousands of companies around the country that have filed exclusion requests with the Commerce Department to avoid being hit by the steel tariff.

Most of them are in the dark, unsure if their applications will be approved. A denial may torpedo plans to expand a factory. Or a company may have to lay off employees.

There's no playbook to guide companies through an exemption process Johnson described as chaotic and unpredictable. He's hired a lobbyist, former New York Gov. George Pataki, to drum up support in Washington. He's fending off objections from competitors who want Borusan's request denied.

On a sweltering afternoon earlier this month, Johnson assembled dozens of his employees in an air-conditioned room for what amounted to a Hail Mary pass. After lunching on sandwiches from Chick-fil-A, Borusan workers wrote personal messages on oversized postcards to be sent to Trump and other senior officials in Washington and Austin, the Texas capital, pleading for their help in securing the tariff exemption.

Johnson said he had for weeks unsuccessfully sought support from GOP Rep. Brian Babin, whose district includes Baytown. Babin wrote to Commerce Secretary Wilbur Ross on Thursday, expressing his strong support for Borusan's request and urging Ross to give it "your highest consideration."

Zanotti declined to say how much Tenaris would have to pay because of the tariff, but he downplayed the expense as a cost of doing business on a global scale. Tenaris operates in 16 countries.

"Of course we don't like it," Zanotti said of the tariff. But, he added, "we're used to dealing with moving parts. This is another moving part."

The company doesn't have a registered lobbyist in Washington, let alone an office. It does have deep pockets, however. The company has spent $8 billion over the last decade to expand its foothold in America, an investment he doesn't think the Commerce Department should overlook.

Although Royal and Trey Green, Local 4134's vice president, were heartened by the steel tariff, they said they're under no illusion Trump is a friend to organized labor. Nor are they convinced his tough talk on trade will lead to a rebuilt U.S. steel industry with more and better jobs.

"I don't know that putting tariffs on just one or two particular items are going to be the mainstay that helps us in the future," Green said.