It followed an 1.4% uptick in May, but is still well below pre-pandemic levels. 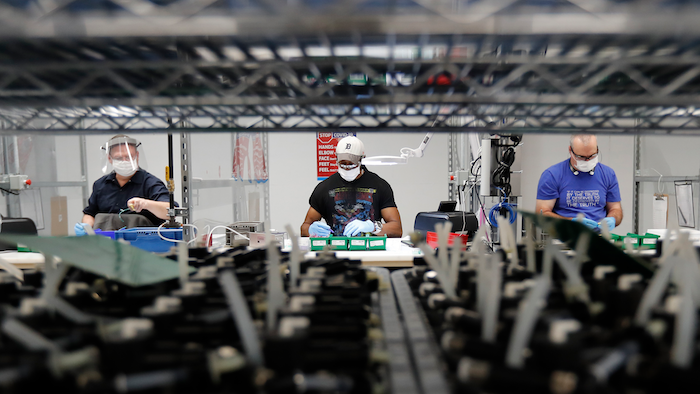 In this May 13, 2020 photo, Ford Motor Co. line workers put together ventilators that the automaker is assembling at the Ford Rawsonville plant in Ypsilanti Township, Mich. American industry rebounded last month as factories began to reopen for the first time since being shut down by the coronavirus in Aprll.
AP Photo/Carlos Osorio

The Federal Reserve said Wednesday that U.S. industrial production rose 5.4% in June, the second straight monthly gain after a 1.4% uptick in May. But it was still 10.9% below the level in February before the economy virtually shut down in the face of the coroanavirus.

The June performance was better than economists had forecasts and reflected the reopening of many parts of the U.S. economy after lockdowns in the spring.

Production at utilities climbed 4.2% last month as a rebounding economy drove up demand for power. But mining output sank 2.9%, the fifth straight drop, pulled down by plummeting oil and gas production.

The rebound in industrial production may not last. A resurgence in COVID-19 cases is forcing governors in the South and West to pause or reverse the economic reopening.

“The road to a full recovery will be much slower compared to the initial strong bounce of the past two months that was prompted by the relaxation of social distancing measures," Oren Klachkin and Gregory Daco of Oxford Economics wrote in a research note. “The virus’ resurgence in many states in recent weeks has already led to the re-imposition of social distancing measures that will drag on the recovery and bolster already significant headwinds facing the industrial sector.''

While MRO sales and demand figure to be subdued for the remainder of 2020, positive signs are abound.
Jul 27th, 2020
Follow Us
Most Recent