Trump and China's chief trade negotiator, Liu He, met at the White House Wednesday to sign the modest agreement. 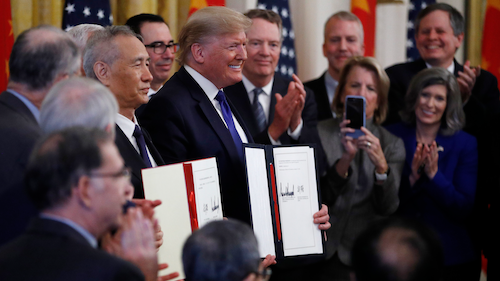 President Donald Trump and Chinese Vice Premier Liu He hold the U.S. China Trade Agreement after signing it in the East Room of the White House on Wednesday, Jan. 15 in Washington.
AP Photo/Steve Helber

WASHINGTON (AP) — President Donald Trump signed a trade agreement Wednesday with China that is expected to boost exports from U.S. farmers and manufacturers, protect American trade secrets and lower tensions in a long-running dispute between the world's two biggest economies.

Trump said during a White House ceremony that the deal is “righting the wrongs of the past." He promoted the signing as a way of delivering economic justice for American workers and said, "We mark a sea change in international trade" with the signing. 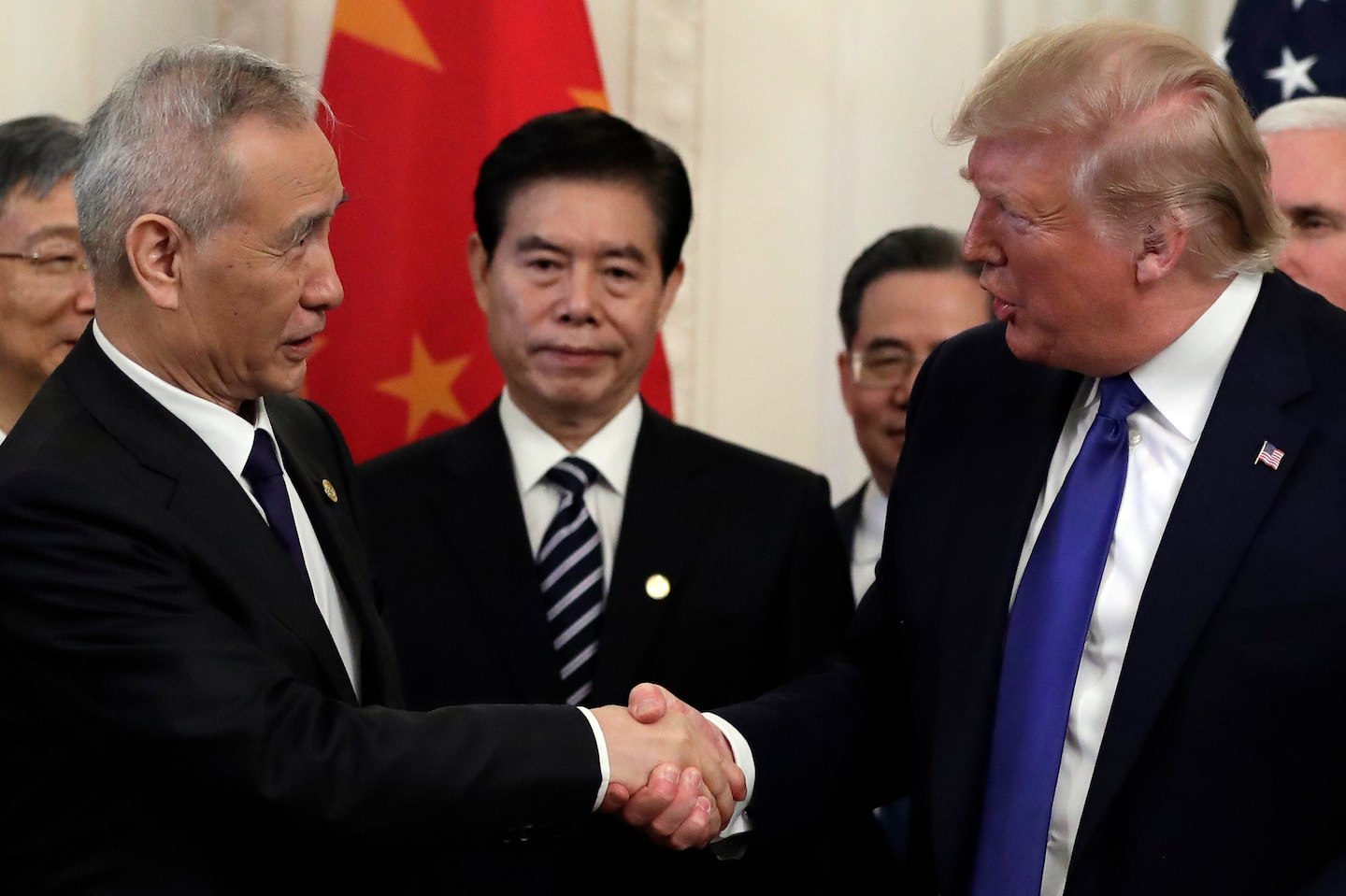 President Donald Trump shakes hands with Chinese Vice Premier Liu He after signing a trade agreement in the East Room of the White House on Wednesday, Jan. 15, in Washington.AP Photo/Evan VucciThe agreement is being described as “phase one" of a larger negotiation focusing on tensions in the U.S.-China trade relationship. Chinese leader Xi Jinping said in a letter to Trump that the first phase was “good for China, the U.S. and for the whole world.” The letter was read by Beijing's chief negotiator, Vice Premier Liu He.

But this agreement left unresolved many of the complaints — notably, the way the Chinese government subsidizes its companies — voiced by the Trump administration when it started the trade war by imposing tariffs on Chinese imports in July 2018.

While the deal stops short of many changes the president has sought from China, it leaves in place tariffs on about $360 billion in Chinese imports, leverage the administration hopes will generate future concessions.

U.S. Trade Representative Robert Lighthizer said work on follow-up negotiations will hinge on how China fulfills the commitments it made in the initial phase.

The White House ceremony gave Trump a chance to cite progress on a top economic priority on the same day that the House prepared to vote to send articles of impeachment to the Senate for a trial. He told Republican lawmakers attending the ceremony that he understood if they had to leave early for votes.

“They have a hoax going on over there. Let's take care of it,” Trump said.

The agreement is intended to ease some U.S. economic sanctions on China while Beijing would step up purchases of American farm products and other goods. Trump cited beef, pork, poulty, seafood, rice and dairy products as examples.

The deal would lower tensions in a trade dispute that has slowed global growth, hurt American manufacturers and weighed on the Chinese economy. Trump said easing trade tensions was critical.

"Keeping these two giant and powerful nations together in harmony is so important for the world," Trump said. “The world is watching today.”

His Chinese counterpart said "the world is now at a critical historical crossroads" facing choices of how to promote country-to-country cooperation.

"Cooperation is the only right choice,'' said Liu.

U.S. trade officials said the agreement would end a long-standing practice of China pressuring foreign companies to transfer technology to Chinese companies as a condition for obtaining market access. Lighthizer said China has also agreed to combat patent theft and counterfeit products, which would include forfeiting machinery used for making counterfeit products. 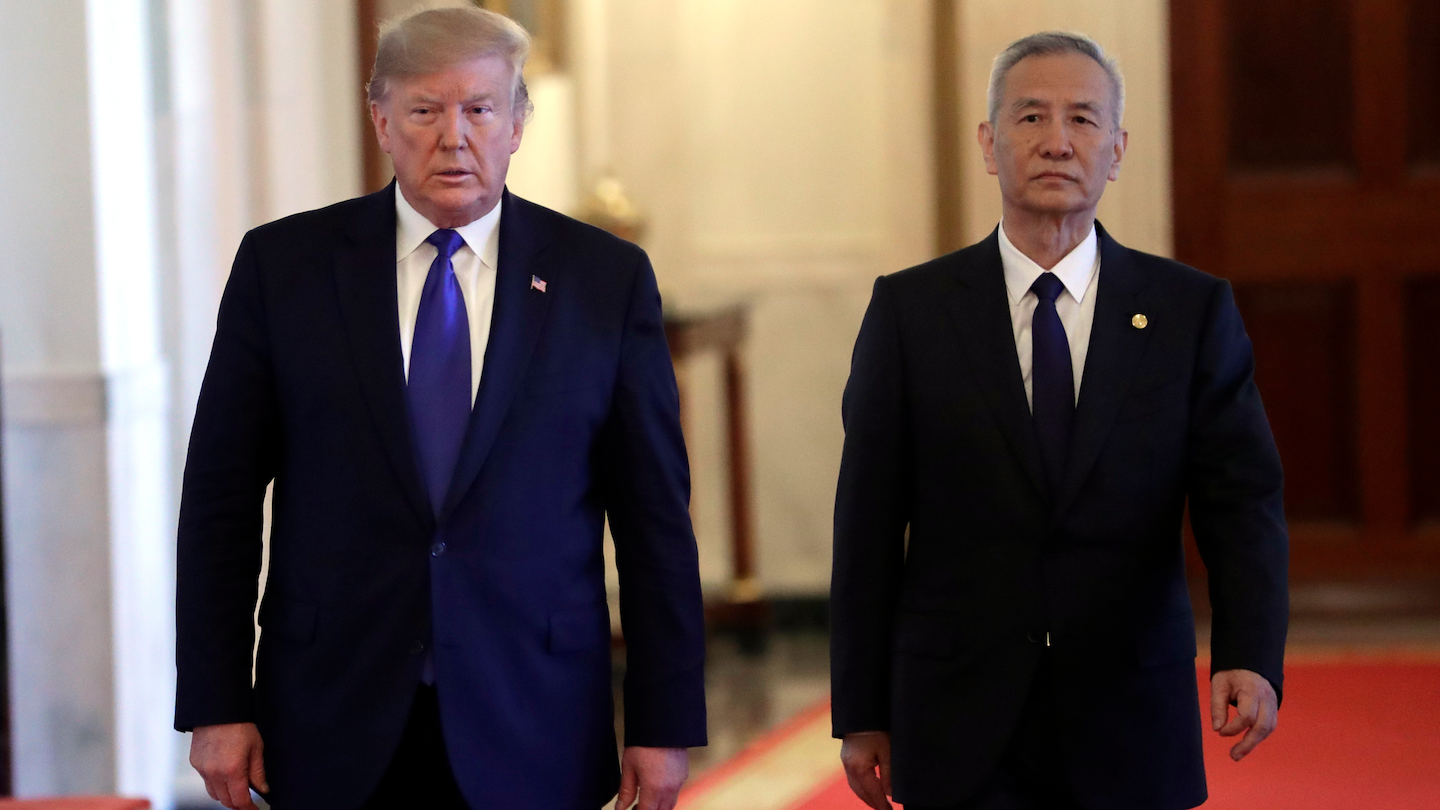 President Donald Trump walks with Chinese Vice Premier Liu He to the East Room of the White House on Wednesday, Jan. 15 in Washington to sign a trade agreement.AP Photo/ Evan VucciThe 86-page agreement makes it easier to bring criminal cases in China against those accused of stealing trade secrets. It includes provisions designed to stop Chinese government officials from using administrative and regulatory procedures to ferret out foreign companies’ trade secrets and allowing that information to get into the hands of Chinese competitors.

The deal requires China to come up with procedures to “permit effective and expeditious action’’ to take down websites that sell pirated goods. China also must make it possible for e-commerce sites to lose their licenses for “repeated failures to curb the sale of counterfeit or pirated goods.’’

China is required to increase its purchases of U.S. manufactured, energy and farm products and services by a combined $200 billion this year and next. The arrangement means that China is supposed to buy $40 billion in U.S. farm exports. That's a windfall for Trump supporters in rural America but an ambitious goal considering that China has never bought more than $26 billion in U.S. agricultural products in a year.

“It’s a strong first step,” said Jeremie Waterman, the U.S. Chamber of Commerce’s vice president for Greater China. “It begins the process of addressing some of the structural concerns, but there’s a lot of work left to do. The meat, the core of (U.S. complaints about China’s aggressive tech policies) has not yet been addressed. Obviously, that’s going to have to wait until Phase 2.’ ’

Critics, including congressional Democrats, say that the first phase allows China to put off serious economic changes by agreeing to buy more U.S. exports. “Right from the start, China was hoping to make the trade dispute go away with lots of purchases, and that strategy has succeeded,’’ said Jeff Moon, a former U.S. diplomat and trade official specializing in China who is now president of the China Moon Strategies consultancy.

Most analysts say any meaningful resolution of the main U.S. allegation — that Beijing uses predatory tactics in its drive to supplant America's technological supremacy — could require years of contentious talks. Skeptics say a satisfactory resolution may be next to impossible given China's ambitions to become the global leader in such advanced technologies as driverless cars and artificial intelligence.

The U.S. has dropped plans to impose tariffs on an additional $160 billion in Chinese imports, and it cut in half, to 7.5%, existing tariffs on $110 billion of good from China.

Derek Scissors, China specialist at the American Enterprise Institute, said the trade war has already delivered a benefit for Trump, even if it hasn’t forced Beijing to make major changes to its economic policy: Trump’s tariffs have reduced Chinese exports to the United States and narrowed America's trade deficit with China.

So far this year, the U.S. deficit with China in the trade of goods has declined by 16%, or $62 billion, to $321 billion compared with a year earlier. The deficit will narrow further if Beijing lives up to its pledges to buy dramatically more American imports.