The European Union approved Monday its terms for negotiating a new trade deal with the United States, but set up a possible show-down with Washington by refusing to include agricultural products in the talks. 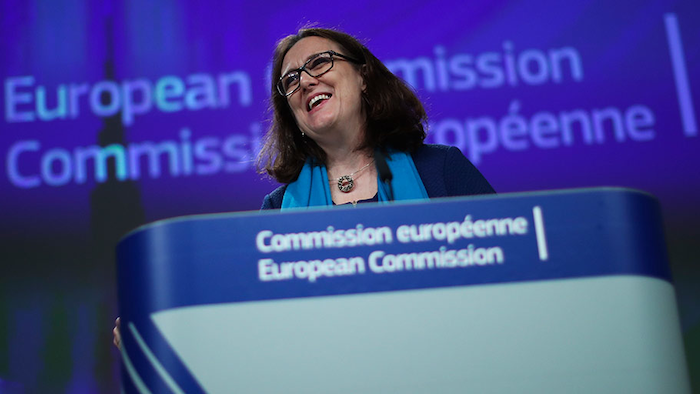 The European Union approved Monday its terms for negotiating a new trade deal with the United States, but set up a possible show-down with Washington by refusing to include agricultural products in the talks.

Making public the mandate for the EU's executive commission to conduct negotiations on their behalf, the bloc's member countries said that the new deal will focus exclusively on eliminating tariffs on industrial goods.

EU Trade Commissioner Cecilia Malmstrom said the commission wants to wrap the talks up within six months, and that she would contact her U.S. counterpart Robert Lighthizer later Monday to work out when formal negotiations might begin.

"We are now ready to move ahead into the next phase of EU-U.S. relations," Malmstrom told reporters in Brussels. "If we agree to start, I think it can go quite quickly. There are sensitivities, absolutely, but we can manage this quite quickly." The commission's term in office expires at the end of October.

The trade talks are the result of a preliminary deal reached last July by European Commission President Jean-Claude Juncker and U.S. President Donald Trump as Brussels sought to head off a looming trans-Atlantic trade war after Trump slapped tariffs on imports of EU steel and aluminum.

Trump imposed tariffs of 25 percent on steel imports and 10 percent on imported aluminum from the EU on June 1. He said the move was to protect U.S. national security interests, but the Europeans claim it is simply protectionism and breaks global trade rules.

In response, the EU introduced "rebalancing" tariffs on about 2.8 billion euros worth ($3.2 billion) of U.S. steel, agricultural and other products.

Trump has held out the threat of slapping auto tariffs on European cars should the trade talks fail to progress. Malmstrom has previously warned that the EU would break off any trade negotiations if he does.

Asked whether U.S. Congress would accept any deal that does not involve agriculture, Malmstrom said: "This is limited, but still meaningful, win-win negotiations that we are offering and that was agreed between the two presidents."

Before Trump came to office, the Europeans had been trying for three years to conclude a more wide-ranging Trans-Atlantic Trade and Investment Pact with the United States.

The pact was meant to lift trade barriers between the world's biggest trading partners, spark sorely-needed economic growth and create new jobs. Malmstrom underlined that the terms of that draft agreement are obsolete and that TTIP, as it is known, is now officially "in the freezer."