U.S. consumer confidence tumbled this month as Americans began to worry that economic growth will moderate next year. But consumer spirits are still high by historic standards. 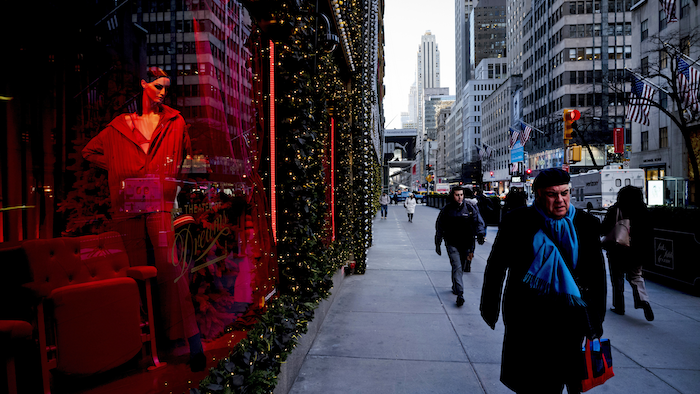 WASHINGTON — U.S. consumer confidence tumbled this month as Americans began to worry that economic growth will moderate next year. But consumer spirits are still high by historic standards.

The Conference Board, a business research group, said Thursday that its consumer confidence index fell to 128.1 in December, down from 136.4 in November and lowest since July.

The index measures consumers' assessment of current economic conditions and their outlook for the next six months. Both fell in December. Consumers' expectations for the future dropped to the lowest level since November 2016.

The December readings "still suggest that the economy will continue expanding at a solid pace in the short-term," said Lynn Franco, the Conference Board's senior director of economic indicators. "While consumers are ending 2018 on a strong note, back-to-back declines in expectations are reflective of an increasing concern that the pace of economic growth will begin moderating in the first half of 2019."

For now, the U.S. economy is solid. Economic growth clocked in at a healthy 3.4 percent annual pace from July through September after surging 4.2 percent in the second quarter. At 3.7 percent, the unemployment rate is the lowest in nearly five decades.

But the U.S. stock market has dropped sharply since early October. Investors have plenty to worry about. The Federal Reserve has gradually been raising interest rates. The economic boost from year-old tax cuts is expected to fade in 2019. Global growth is sputtering. And the U.S. and China — the world's two biggest economies — are locked in a trade war that threatens to disrupt global commerce.