October 2018 U.S. cutting tool consumption totaled $223.46 million according to the U.S. Cutting Tool Institute (USCTI) and AMT – The Association For Manufacturing Technology. This total, as reported by companies participating in the Cutting Tool Market Report collaboration, was up 6.1 percent from September’s $210.58 million and up 12.9 percent when compared with the $197.99 million reported for October 2017. With a year-to-date total of $2.07 billion, 2018 is up 12.8 percent when compared with 2017.

“October results continue the trend we have seen all year. There are some monthly fluctuations but the year over year and year to date remain over 12% ahead of last year. The market buzz continues to be positive and it appears 2018 will be the best year in over 6 years,” said Phil Kurtz, President of USCTI.

According to Scott Hazelton, Managing Director of Economics & Country Risk at IHS Markit, “Higher oil prices, fiscal stimulus, particularly for investment goods, and consumer demand for durable goods will make 2018 a strong year for manufacturing in general, and cutting tools in particular. Business confidence ebbed towards the end of 2018, with uncertainty over trade and the duration of strong economic growth increasing. Combined with a declining tailwind from tax reform, and increasing wages in a tight labor market, we expect some slowing of manufacturing growth next year, with cutting tool demand growth likely downshifting from over 13% in 2018 to just under 7% in 2019. This still suggests another strong year in 2019, but growth will moderate further in 2020 as the broad economy slows.”

The Cutting Tool Market Report is jointly compiled by AMT and USCTI, two trade associations representing the development, production and distribution of cutting tool technology and products. It provides a monthly statement on U.S. manufacturers’ consumption of the primary consumable in the manufacturing process – the cutting tool. Analysis of cutting tool consumption is a leading indicator of both upturns and downturns in U.S. manufacturing activity, as it is a true measure of actual production levels. 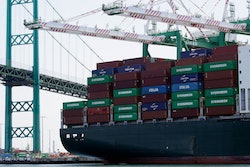 But the central bank's chairman signaled that its next rate hike could be smaller.
December 1, 2022

The window is longer than many on Wall Street have expected.
November 29, 2022