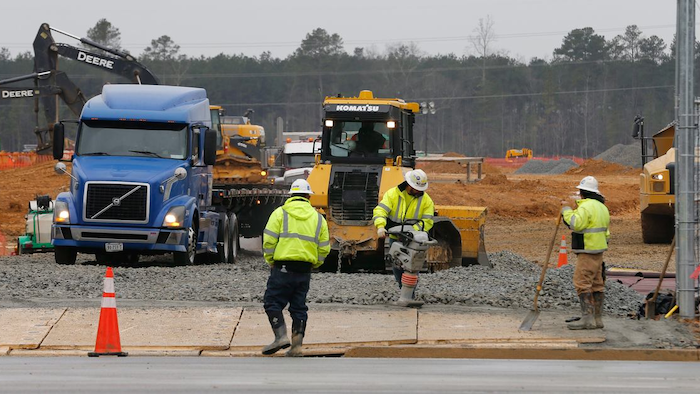 New construction starts in March advanced 16 percent from the previous month to a seasonally adjusted annual rate of $809.2 billion, according to Dodge Data & Analytics. The substantial gain followed a lackluster performance during the first two months of 2019, as total construction starts in March were able to climb back to a level slightly above the average monthly pace during 2018.

The nonbuilding construction sector, comprised of public works and electric utilities/gas plants, jumped 40 percent in March from a weak February, lifted by the start of a $4.3 billion liquefied natural gas (LNG) export terminal in Cameron LA. Nonresidential building increased 24 percent in March, aided by groundbreaking for several large projects. These included the $1.6 billion Toyota-Mazda automotive manufacturing facility in Huntsville, Alabama, a $1.1 billion hotel and theater redevelopment in New York City, and the $850 million renovation of the KeyArena in Seattle, Washington.

In contrast, residential building slipped 3 percent in March, as multifamily housing retreated for the second consecutive month. During the first three months of 2019, total construction starts on an unadjusted basis were $164.5 billion, down 10 percent from the same period a year ago. On a twelve-month moving total basis, total construction starts for the twelve months ending March 2019 essentially matched the corresponding amount for the twelve months ending March 2018.

“The month-to-month pattern for construction starts is often affected by the presence or absence of very large projects, and March certainly benefitted from groundbreaking for a number of very large projects,” says Robert A. Murray, chief economist for Dodge Data & Analytics. “It remains true that the construction expansion is decelerating, but the March upturn indicates that the loss of momentum won’t be as pronounced as suggested by the subdued activity in January and February. It’s still expected that the overall dollar amount for construction starts for 2019 will be able to stay close to what was reported for 2018. On the plus side, the passage of federal appropriations for fiscal year 2019 in mid-February seems to be helping the public works sector. The electric utility and gas plant category has shown surprising strength during early 2019, following the steep declines over the previous three years. The commercial building segment is supported by market fundamentals that have yet to erode, while the institutional building segment continues to move at a good clip. The areas of concern in the near term relate to residential building, with single family housing not able to strengthen due to affordability constraints while multifamily housing seems to be pulling back from its strong 2018 pace.” 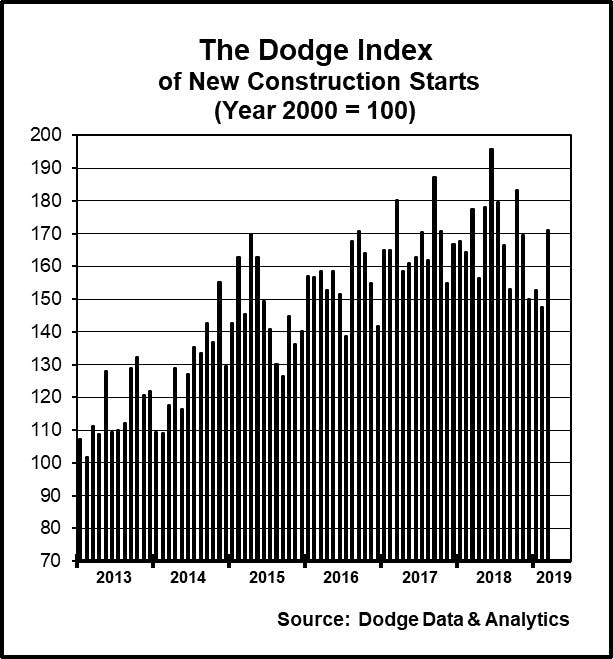 Nonbuilding construction in March increased 40 percent to $214.7 billion (annual rate), following four straight months of decline that saw activity drop a combined 19 percent. The electric utility and gas plant category soared 116 percent, led by the inclusion of the $4.3 billion Calcasieu Pass LNG export terminal project in Cameron, Louisiana as a March construction start. Gas plant-related construction starts (primarily LNG export terminals) had reached a peak back in 2015 at $26.2 billion, but then plunged to only $0.6 billion by 2017 before rebounding to $5.1 billion in 2018. The Calcasieu Pass LNG export terminal project should contribute to another increase for gas plant-related construction starts in 2019. If this massive project is excluded from the March statistics, the electric power and gas plant category would have fallen 76 percent from February, but gains would still have been shown by nonbuilding construction, up 7 percent; and total construction, up 9 percent. The public works categories as a group climbed 21 percent in March, rebounding after a 14 percent slide in February. Miscellaneous public works (which includes such diverse project types as site work, pipelines, and rail transit) jumped 84 percent after a weak February, led by such projects as a $312 million segment of the border wall in south Texas and a $283 million upgrade to a train control signal system in Brooklyn, New York. Highway and bridge construction starts in March grew 4 percent, showing improvement after declines in January (down 5 percent) and February (down 6 percent). The top five states for highway and bridge construction starts in March, ranked by dollar volume, were: Texas, California, Pennsylvania, Florida, and North Carolina. The environmental public works categories showed a varied performance in March, with gains for dams/river harbor development, up 62 percent; and water supply construction, up 4 percent; but a decline for sewer construction, down 7 percent.

The institutional side of nonresidential building grew 17 percent in March, picking up the pace after basically flat activity during the previous three months. Amusement-related construction starts jumped 90 percent, reflecting the $850 million renovation of the KeyArena in Seattle that will be home to an NHL team and potentially an NBA team. The $150 million theater portion of the $1.1 billion hotel and theater redevelopment project in Times Square also lifted the amusement-related category in March. Educational facilities, the largest institutional category, grew 6 percent in March. Large projects that boosted the educational facility category were a $500 million research laboratory for the U.S. Department of Energy in Idaho Falls, Idaho, a $173 million high school in Worcester, Massachusetts, and a $129 million science building at San Jose State University in San Jose, California. Healthcare facilities edged up 2 percent in March, helped by the start of a $310 million hospital at the University of Pittsburgh Medical Center in Pittsburgh. The other institutional project types showed mixed behavior in March: public buildings up 48 percent after a weak February, religious buildings up 7 percent, and transportation terminals down 22 percent.

Residential building in March dropped 3 percent to $291.2 billion (annual rate), retreating for the second month in a row. Multifamily housing fell 12 percent in March, with the level of activity coming in 20 percent below the average monthly pace reported during 2018. There was one very large project entered as a March construction start: the $511 million multifamily portion of the $950 million Grand Avenue mixed-use high-rise complex in Los Angeles. There were five additional multifamily projects valued at $100 million or more that were entered as March construction starts, including the $165 million One Boerum Place condominium high-rise in Brooklyn, New York and the $145 million multifamily portion of a $300 million mixed-use high-rise complex in West Palm Beach, Florida. The top five metropolitan areas ranked by the dollar amount of multifamily starts in March were New York Coty, Los Angeles, Miami, Washington DC, and Minneapolis-St. Paul. Single family housing in March edged up 1 percent from the previous month, although its March level of activity was still 7 percent below the average monthly pace reported during 2018. By geography, single family housing showed this pattern for March relative to February—the Northeast, up 5 percent; the West, up 4 percent; the South Central, up 3 percent; the South Atlantic, down 1 percent; and the Midwest, down 2 percent.

The 10 percent decline for total construction starts on an unadjusted basis during this year’s January-March period was due to decreased activity for all three main sectors compared to last year. Residential building fell 15 percent year-to-date, with single family housing down 12 percent and multifamily housing down 23 percent. Nonbuilding construction dropped 6 percent year-to-date, as a 23 percent slide for public works was partially offset by a 161 percent hike for electric utilities/gas plants. Nonresidential building retreated 5 percent year-to-date, with respective declines of 30 percent and 10 percent for manufacturing plants and institutional building while commercial building was able to register a 6 percent gain. By major region, total construction starts for the first three months of 2019 showed this performance versus last year: the Midwest, down 24 percent; the South Atlantic and the West, each down 12 percent; the Northeast, down 6 percent; and the South Central, up 2 percent.

Additional perspective comes from looking at twelve-month moving totals, in this case the twelve months ending March 2019 versus the twelve months ending March 2018. On this basis, total construction starts for the most recent twelve months held steady with the amount of the previous period. By major sector, nonresidential building increased 2%, with manufacturing building up 9 percent, commercial building up 7 percent, and institutional building down 3 percent. Residential building grew 1 percent, with single family housing up 1 percent while multifamily housing was unchanged. Nonbuilding construction dropped 4 percent, with public works down 5 percent and electric utilities/gas plants down 1 percent.

Main image: Workers prepare a construction entrance to the Facebook data center that is being built in Sandston, VA. (AP Photo/Steve Helber)