Seeking better-skilled workers, Cedar Electronics decided last year to return some of its manufacturing to the United States from the Philippines, only to run smack into a worsening U.S.-China trade war. 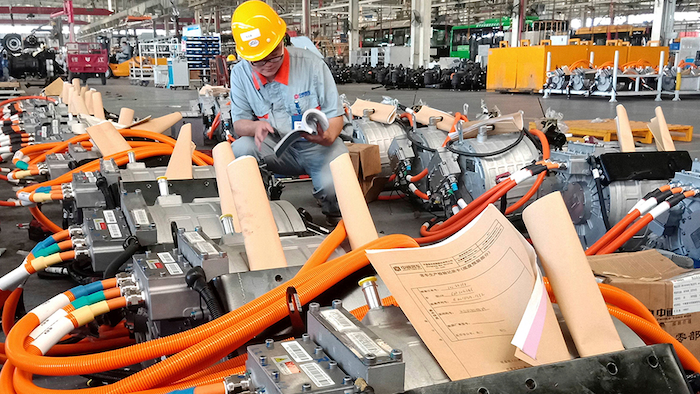 WASHINGTON — Seeking better-skilled workers, Cedar Electronics decided last year to return some of its manufacturing to the United States from the Philippines, only to run smack into a worsening U.S.-China trade war.

Cedar makes radar and laser detection systems. When it shifted the assembly of those machines to Westchester, Ohio, it provided jobs for 30 people. Yet with President Donald Trump escalating his tariffs on Chinese imports, Cedar must now pay hefty taxes on critical imported parts — tariffs it didn't have to pay when that manufacturing was done overseas.

"We're effectively being penalized for bringing back that product manufacturing from the Philippines to the U.S.," said Chris Cowger, the Chicago-based company's chief executive. "If we had known this time last year, we most likely would not have brought those jobs back."

On Monday, Trump intensified his trade war with China by announcing tariffs on an additional $200 billion of Chinese goods, including antennas and other electronic components that Cedar incorporates into dashboard cameras, CB radios and its detection systems. That followed tariffs on $50 billion in goods that Trump had already imposed on Beijing, which retaliated in kind.

Seafood, handbags, baseball gloves and thousands of additional items were also affected by the latest Trump tariffs. China swiftly announced that it would impose tariffs on $60 billion of U.S. exports. Caught in the crossfire are companies like Cedar that depend on affordable imports and other businesses whose exports may now become prohibitively expensive in China.

The tit-for-tat blows signal that the trade fight will likely escalate further. While most analysts say the latest tariffs will likely have only a minimal effect on the U.S. or Chinese economy for now, they stand to inflict real damage, in the United States and perhaps globally, beginning next year. The latest Trump tariffs will start at 10 percent next week but will jump to 25 percent on Jan. 1.

What's more, Trump has warned that if China retaliates with its own tariffs, he's prepared to tax an additional $267 billion in Chinese imports. At that point, the Trump administration will have raised tariffs on virtually every good China sells the United States.

Because China said Tuesday that it would retaliate, Trump is now in a position, some analysts noted, in which he must follow through on his threat or lose credibility. That makes it more likely that the additional tariffs will be take place. Yet few think Beijing is prepared to yield.

If tariffs on the additional $267 billion of Chinese imports are put in place, the total hit from the administration's trade fight with Beijing could slow U.S. economic growth by a third, to roughly 2 percent, in 2019, Daco estimates.

Some other economists forecast milder impacts. But most foresee the threat to the U.S. economy rising.

"This is the point where we move from very small effects to something that's more notable," said Lewis Alexander, an economist at Nomura Securities.

The worsening dispute, Alexander said, is taking the United States into unknown economic territory. For the past three decades, the U.S. economy has become increasingly open and more globally connected, with complex supply chains moving its products and those of its key trading partners across borders with few obstacles.

Now, it's taking a step back.

"We don't have experience with this kind of policy change," Alexander said.

Adding to the uncertainty are other trade disputes that make it harder for companies to make long-term plans, he added. Some multinational companies, for example, that might want to shift production from China to Mexico could delay that move until talks to rewrite the North American Free Trade Agreement conclude. The U.S. has reached an agreement with Mexico on changes to the agreement, but has yet to do so with Canada.

China's economy will likely also absorb a hit from the White House's latest move. Louis Kuijs, an economist also at Oxford Economics, forecasts that all the tariffs now imposed will reduce its growth in 2019 by 0.4 percentage point.

That slowdown could weigh on the broader global economy as well. The economies of developing countries that export farm goods and other commodities to China could weaken.

The Trump tariffs will likely raise U.S. inflation modestly, economists estimate, particularly if all imports from China are taxed. That would raise the cost of many more everyday consumer items — from shoes and toys to smartphones and home appliances.

The chief executive of the Macy's store chain, Jeff Gennette, said he expects more tariffs will be imposed and to begin hurting department stores and other clothing retailers. But he says it's too early to determine how exactly the tariffs will affect consumers.

Auto industry purchasing managers may have to scramble to find sources outside of China for such parts as tires, belts and gaskets, said David Closs, a professor at Michigan State University. The industry will start looking for factories in Southeast Asia and Latin America, rather than the United States, to make the parts in countries that are not being hit by the same tariffs, he said.

"Every decision that they've made historically to source the components for cars, now they have to re-look at it," Closs said of the industry.

Sean O'Scannlain, the chief executive of Fortune Fish & Gourmet in Chicago, said he recently had seven workers package an order for 36,000 pounds of individually wrapped Chinese tilapia for a meal delivery company.

Once tariffs lift the price of tilapia, "my hunch is that they will not re-order that."

"Those companies are so sensitive on the pricing," O'Scannlain said, "even a 10 percent increase could cause them to move away from that."

O'Scannlain said his profits are too narrow for him to absorb the cost of higher tariffs, and he will have to pass the higher costs on to his restaurant and retail customers.

The chief executive of auto-parts retailer AutoZone, William Rhodes, told investors Tuesday that the company has so far passed on higher tariff costs to consumers and would likely keep doing so.

Some smaller companies worry they could go out of business entirely.

Sherill Mosee, founder of MinkeeBlue, which makes travel and work bags made in China, says she might have to close her company by next spring if she doesn't find a new manufacturing partner for her handbags, which are now made in China. Her products for the holiday season have already been made.

"This should have been implemented over time, not in weeks," she said. "You need a whole new supply chain."

Bill Adams, an economist at PNC Financial, said the trade confusion is making the United States a less attractive place for large companies to invest. Foreign investment in the U.S. has fallen by half from 2015 through the first quarter of this year.

"Global companies — the channel spreading the most advanced technological and organizational innovations through the global economy — are looking elsewhere for their long-term growth," Adams said.