The Trump administration's budget plan for 2018 assumes that a mix of sharp spending and tax cuts can both shrink the deficit and fuel economic growth of 3 percent a year — a level it hasn't achieved in more than a dozen years.

WASHINGTON (AP) — The Trump administration's budget plan for 2018 assumes that a mix of sharp spending and tax cuts can both shrink the deficit and fuel economic growth of 3 percent a year — a level it hasn't achieved in more than a dozen years.

Most economists and budget experts dismiss that promise as fancifully unrealistic.

They say there are multiple flaws with the numbers unveiled by President Donald Trump's budget director, Mick Mulvaney. They range from improbable growth projections that appear to disregard an aging population to proposed cuts to education, research and social programs that have helped sustain the productivity of U.S. workers.

There also appears to be a dubious calculation regarding how the tax cuts are counted: The plan seems to use the lower taxes championed by Trump to promise stronger growth while also assuming that the tax cuts will boost revenue to shrink the budget gap.

The nonpartisan Congressional Budget Office estimates that the economy will expand on average 1.8 percent annually over the next decade — in sharp contrast to the Trump administration. The Trump team assumes that it can accelerate growth by more than a full percentage point — the equivalent of roughly $200 billion annually in today's dollars. At a time of sluggish worker productivity, an aging workforce and slower spending by consumers, most economists say the promises are farfetched.

"The numbers add up on paper, but they don't add up in reality," said Marc Goldwein, senior vice president and policy director at Committee for a Responsible Federal Budget. "For this budget to work, you need a time machine to take us back to the 1990s."

Mulvaney pitched the $4.1 trillion budget proposal as reflecting the interests of taxpayers who want their money properly spent. Along with Treasury Secretary Steve Mnuchin and Gary Cohn, director of the National Economic Council, the budget director said he had determined the growth rate by estimating the impact of fewer federal regulations, a still vague set of tax cuts and the repeal of the 2010 federal health care law.

Mulvaney stressed that the administration had ruled out the likelihood that the economy will grow only about 2 percent annually.

"We reject that pessimism," Mulvaney said at a White House briefing Tuesday. "If you assume 1.9 percent growth, my guess is you'll never see a balanced budget again."

Even some Republican lawmakers said they were unsure just how the budget could deliver its pledge of sustained 3 percent growth beginning in 2020 — a critical factor in the administration's forecast that the budget would achieve a surplus in 2027. The administration has refused to cut programs that benefit older Americans such as Social Security and Medicare. As a result, its projections of lower deficits depend on faster growth and trillions of dollars cut from domestic programs.

House Speaker Paul Ryan stopped short of embracing the administration's budget projections. Ryan, a Wisconsin Republican, said faster growth would solve "many of our problems," but "whether or not we hit those numbers or not, I don't know the answer to that because I haven't seen all of those numbers."

Similarly, Rep. Mark Sanford, R-South Carolina said, "I'm not seeing how you get there mathematically."

"If we lay out unrealistic projections, it confuses people and it allows people to think there can be a free lunch where there isn't one," the congressman added. "Supposedly you can put these different pieces of the puzzle together in a way that you don't touch entitlements. But the reality is you can't. So it creates a lie that we all then either address or don't address, but it makes for a make-believe debate that I find frustrating."

Two major factors usually determine how fast an economy can grow. Both can be influenced to some extent by taxes and government spending.

First, the rate at which workers enter the economy can propel growth. But the aging baby boomer population means this rate has been slowing and dampening growth relative to the levels enjoyed in the several decades after World War II, when growth averaged close to 3 percent.

The 1990s were a boom time in part because the baby boomers had entered their peak earning years. That advantage no longer exists. The Trump budget also seeks to curb illegal immigration, which could discourage foreigners — even those with visas — from entering the country and increasing the size of the workforce.

Because of the aging population, Trump cannot return the economy to 3 percent growth, said Bill Hoagland, a senior vice president at the Bipartisan Policy Center who formerly served as a Republican aide on the Senate Budget Committee.

"There is one thing he cannot change — the demographics," Hoagland said.

Second, people can become more productive by generating more income per hour worked. This generally requires workers to cultivate skills and graduate from college or for companies to deploy new technology that enhances what workers already do. The challenge is that over the coming decade the Trump budget would cut nearly $3.6 trillion from benefit programs and domestic agencies that help fund education and research.

Hoagland noted that many of these programs are "necessary" for investing in workers to increase productivity.

The Trump administration's assumed growth contrasts sharply with the average of roughly 2.3 percent that the Obama administration projected in its fiscal 2017 budget proposal. The gap between the Trump budget and the CBO estimates is "unprecedented," accordingly to an analysis by Chad Stone, chief economist at the Center for Budget and Policy Priorities, a liberal think tank.

But part of the problem is the notion that the Trump tax cuts — the administration has produced only a one-page sketch of its plan — would boost growth and simultaneously reduce the deficit. Not a top academic economist surveyed this month by the University of Chicago said such a feat was possible given today's economic and demographic circumstances.

Jason Furman, a chairman of the White House Council for Economic Advisers under Obama, suggested that the Trump administration had double-counted the supposed benefits of its tax cuts. It assumed that new lower rates would increase growth, while essentially using the existing rates to justify the higher tax revenue to close the deficit gap.

Mulvaney insisted that the administration had been prudent in its estimates of tax revenue and rejected the premise that a tax cut must lead to lower tax revenue.

Furman noted that the administration has yet to publicly reveal specifics of its policies, making its projections of growth and revenue suspect.

Trump is "starting with a growth rate without even saying what the policy is," he said. 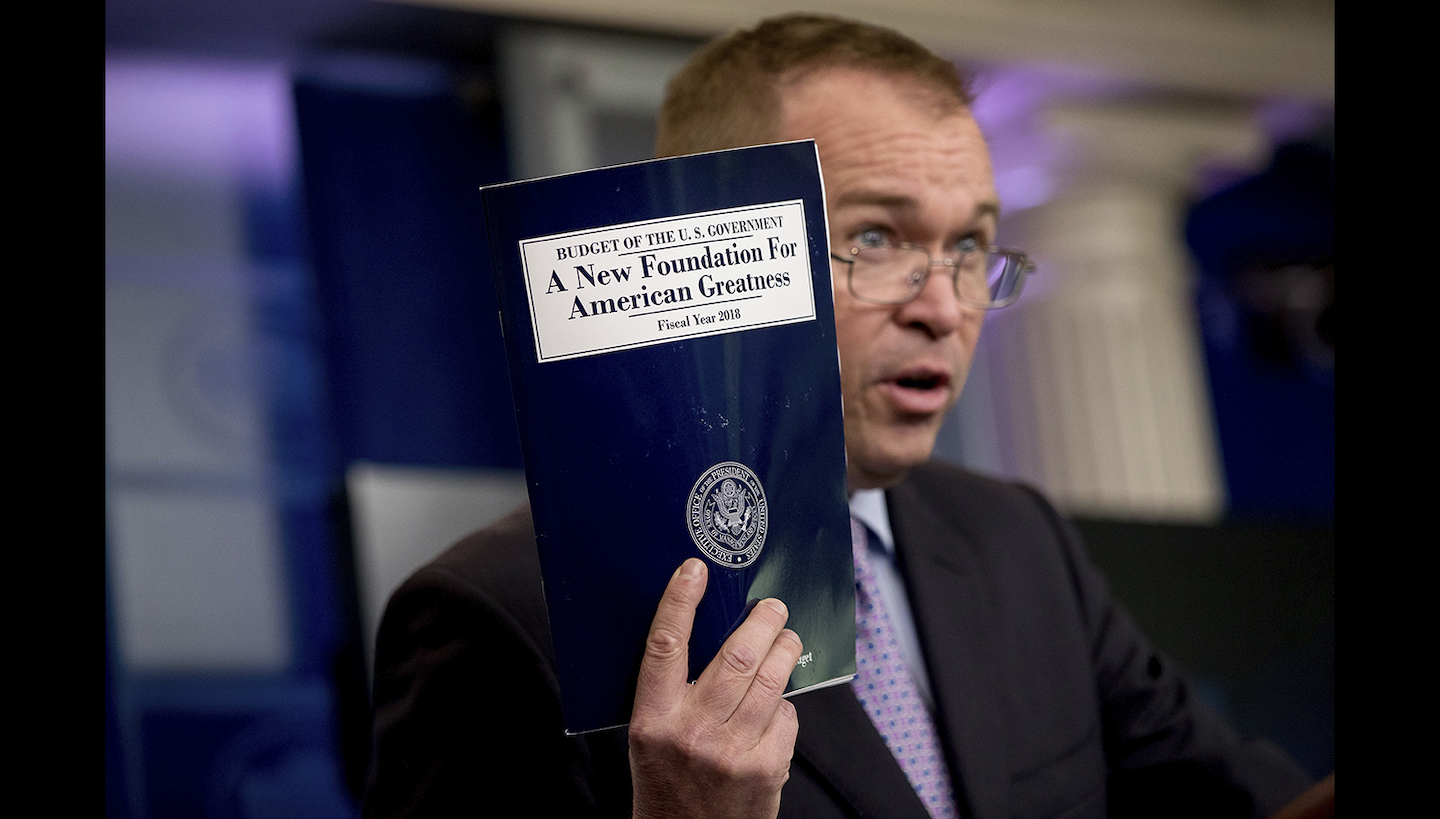 Budget Director Mick Mulvaney holds up a copy of President Donald Trump's proposed fiscal 2018 federal budget as he speaks to members of the media in the Press Briefing Room of the White House in Washington, Tuesday, May 23, 2017. (AP Photo/Andrew Harnik)
Latest in Economy