U.S. Wages Rise By Most in Decade Even as Hiring Tumbles 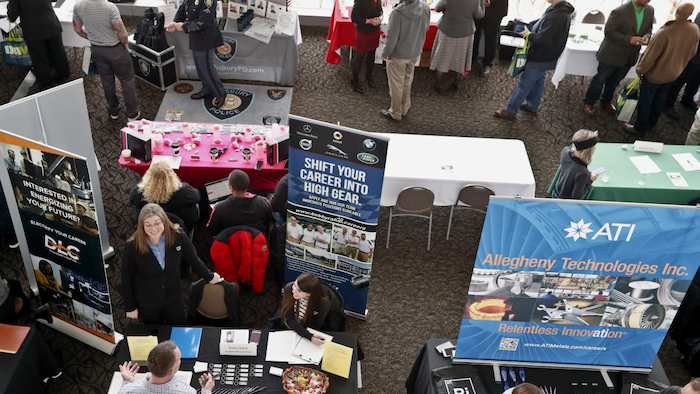 The pace of hiring in the United States fell last month to its lowest point in nearly a year and a half, a surprise drop likely reflecting harsh weather and other temporary factors that led most economists to see the slowdown as a temporary blip.

Employers added just 20,000 jobs, down from a blockbuster 311,000 in January. Even with February's anemic gain, job growth over the past three months has averaged a solid 186,000, enough to lower the unemployment rate over time.

And average hourly pay surged 3.4 percent from a year earlier—the sharpest year-over-year increase in a decade. The unemployment rate also dropped to 3.8 percent, near the lowest level in five decades, from 4 percent in January.

All told, Friday's monthly employment report from the government pointed to a still-sturdy job market and economy.

"The U.S. labor market is still in good shape," said Gus Faucher, chief economist at PNC Financial. "Slower job growth was expected after huge average gains of better than 250,000 over the preceding four months. Job growth should bounce back in March and through the rest of this year."

Last month's pullback in hiring does follow signs that U.S. economic growth is probably slowing because of a weaker global economy, a trade war between the United States and China and signs of caution among American consumers. Those factors have led many analysts to forecast anemic growth in the first three months of this year.

But most economists still cautioned against reading too much into February's sluggish pace of hiring. The monthly employment data can be volatile. During the nearly decade-long recovery from the Great Recession, job growth has sometimes plunged in a single month—to 15,000 in May 2016, for example, and to 18,000 in September 2017—only to rebound to healthy levels in the months that followed.

And February's increase in average pay suggests that businesses are stepping up their efforts to attract and keep workers. The year-over-year increase of 3.4 percent in February is up from a corresponding figure of just 2.6 percent a year ago.

Julia Pollak, a labor economist at jobs marketplace ZipRecruiter, said many companies are becoming increasingly hungry for workers. The number of job ads on its site that offer to pay for training, she said, jumped 42 percent last year from 2017. And positions that offer flexible hours soared 110 percent—a trend that could draw more women with family responsibilities off the sidelines and into work.

"Employers are finding all these ways to sweeten the deal and invest in their employees," Pollak said.

Carole Witkowski, vice president of human resources at Batteries and Bulbs, said her 700-store retail chain has raised starting hourly pay for workers at its distribution center from $11 to $12, with additional raises for those working evening and overnight shifts.

The company has taken other steps, she said: Jobs at the distribution center, located outside Milwaukee, don't require high school diplomas and have been plagued by high turnover. Many workers can find jobs elsewhere. Others haven't worked much before and aren't always used to showing up on time regularly. So about 18 months ago, the company started paying $250 each quarter to workers who arrive on time every day.

And in the suburbs outside Chicago, when the company received no applications in response to retail job postings last winter, it offered a $500 signing bonus. That shook loose some applicants.

"We got a little aggressive there," Witkowski said.

Nationally, though, the sluggish hiring and job cuts in February were widespread across industries. Construction cut 31,000 jobs, the most in more than five years, likely because of cold weather. Manufacturing added just 4,000, the fewest in a year and a half, a sign that Trump's trade war has raised costs and lowered exports for many factories.

Retailers cut 6,100 positions, while jobs in a category that mostly includes restaurants and hotels were unchanged .

The unemployment rate fell despite the tepid pace of hiring. The government uses one survey of households to calculate unemployment and a separate survey of businesses to count job growth, and sometimes the results of the two surveys diverge for a single month.

The jobless rate for African-Americans, which hit a record low of 5.9 percent in May and has frequently been celebrated by President Donald Trump, rose for a third straight month in February to 7 percent, its highest point in more than a year. The rate for Hispanic and Latino Americans, though, dropped to a record low of 4.3 percent.

Also on a positive note, the proportion of part-time workers who'd prefer full-time jobs fell sharply. That measure had risen in January during the shutdown as some furloughed government workers took part-time jobs temporarily. But in February, a gauge of what is called underemployment, which includes part-timers who want full-time work and discouraged people no longer looking for jobs, reached 7.3 percent, the lowest level since 2001.

There are signs that the economy is slowing: Consumer confidence fell sharply in January, held back by the shutdown and by a steep fall in stock prices in December. And Americans spent less over the winter holidays, with consumer spending plunging in December by the most in five years.

"We are seeing a fading of the effects of the Trump tax cut and increased government spending," which helped accelerate growth last year, said Sung Won Sohn, chief economist at SS Economics.

Analysts generally foresee growth slowing sharply in the first three months of this year to just a 1 percent annual rate, down from a 2.6 percent rate in the October-December quarter. Still, most expect a rebound in the April-June quarter, and there are already signs of one: Consumer confidence rose in February along with the stock market. And more Americans signed contracts to buy homes in January, propelled by lower mortgage rates.

Main image: In this Thursday, March 7, 2019, photo visitors to the Pittsburgh veterans job fair meet with recruiters at Heinz Field in Pittsburgh. On Friday, March 8, the U.S. government issues the February jobs report, which will reveal the latest unemployment rate and number of jobs U.S. employers added. (AP Photo/Keith Srakocic)​