Can Low Oil Prices Be Good For The Environment?

At around $75 a barrel, the price is high enough to keep investments flowing into alternatives, while giving energy companies less reason to pursue expensive and risky oil fields. 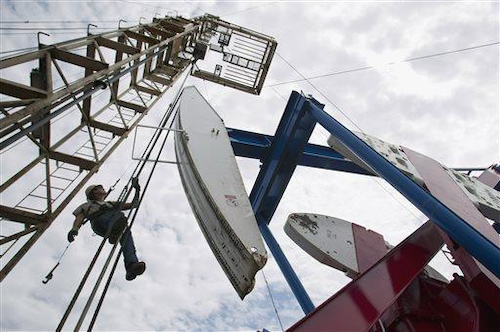 Deepwater drilling rigs are sitting idle. Fracking plans are being scaled back. Enormous new projects to squeeze oil out of the tar sands of Canada are being shelved.

Maybe low oil prices aren't so bad for the environment after all.

The global price of oil has plummeted 31 percent in just five months, a steep and surprising drop after a four-year period of prices near or above $100 a barrel.

Not long ago a drop of that magnitude would have hit the environmental community like a gut-punch. The lower the price of fossil fuels, the argument went, the less incentive there would be to develop and use cleaner alternatives like batteries or advanced biofuels.

But at around $75 a barrel, the price is high enough to keep investments flowing into alternatives, while giving energy companies less reason to pursue expensive and risky oil fields that also pose the greatest threat to the environment.

Economists and environmentalists caution that if the price goes too low, and stays there, consumption could swell and the search for alternatives could stop. They say a good price range for the environment could be somewhere between $60 and $80.

As oil demand in developing countries began rising in the last decade, drillers struggled to keep up and prices began to rise. It seemed the world might be running out of oil. Investors poured money into advanced biofuels companies and battery-makers betting high oil prices would make it cheaper to drive on plant waste or electricity.

It hasn't happened, despite some headway. Even after years of growth, electric cars accounted for just 0.4 percent of new vehicle sales so far this year, according to Edmunds.com. Biofuels from plant waste account for even a smaller percentage of the nation's fuel mix.

The high prices instead inspired drillers and investors to pursue oil wherever it might be found no matter the expense. They developed projects in environmentally-sensitive areas or using environmentally-destructive methods. They developed technology that has unlocked vast resources once thought out of reach. What was once a shortage now looks to be a surplus.

"It was a net negative from a climate perspective," says Andrew Logan, director of oil and gas programs at the environmental group Ceres. "It locked us into long-term dependence on oil."

Scientists say that in order to keep global temperatures from rising to especially dangerous levels, society has to resist pulling up and burning the enormous amounts of oil that companies have found. The world's two biggest emitters, China and the U.S., reached a surprise agreement this week that would work toward that goal, though it remains unclear whether or how the deal will be implemented.

The question now is whether this plunge in prices will help or hurt that effort.

Some say the answer is clear: "There will be more demand (for fossil fuels) and less incentive for alternative technology," says James Stock, an economist who recently served on the Council of Economic Advisers and is now at Harvard University. "In the long run it is unambiguously bad to have low oil prices from an environmental perspective."

With a national average price of gasoline under $3 per gallon for the first time since 2010, people can afford to drive more, and they are buying more large SUVs. With gas nearly 50 cents a gallon cheaper than last year, it will take another 1.5 years of fuel savings to recoup an investment in a more expensive, more fuel-efficient Toyota Prius over a Toyota Corolla.

In the U.S., strict fuel economy standards are making cars and trucks more efficient, helping to reduce demand regardless of price. The Energy Department predicted this week that the average price of gasoline would fall 13 percent next year — yet demand would also fall.

In much of the developing world — which is propelling the rising global demand for oil — fuel prices are set by the government, not by markets. Consumers don't pay less even if the price on the open market falls.

And while low oil prices encourage drivers to use more, they also force oil companies to drill less. The places they cut back first are areas that are risky, like the Arctic or deep offshore, or require lots of energy, like the Canadian tar sands, because they are the most expensive.

The offshore rig-owner Transocean, which owned the Deepwater Horizon rig that exploded in 2010 and led to the worst U.S. oil spill, announced special charges of nearly $3 billion last week because demand for its rigs has fallen. Its shares are down 42 percent since June.

The Norwegian oil giant Statoil announced in late September that it would shelve plans to develop a project in Canada that would have produced 40,000 barrels of day of oil for years. The process is energy-intensive and too expensive given oil prices and construction costs.

If oil sands production slows, it could lessen the need to build the Keystone XL pipeline even if congressional Republicans succeed in their effort to get the Obama Administration to approve it. The project is reviled by environmentalists who believe it will further tie the world to what they consider especially dirty oil.

Ceres' Logan says a perfect oil price might be around $70 a barrel, near where it is now. Consumers will still be careful with how much they use, but oil companies might not be willing to go to extreme measures to find new oil.

"It's low enough to make high-carbon oil uneconomic, but not so low that it kills off investments in renewables," he says.

Owners with available cash and a wish list should consider what equipment they need.
Joyce M. Rosenberg
Nov 25th, 2019

In this webinar you learn how Identity Access Management can reduce costs and friction while also improving security.
Okta, Inc.

Providing Technology to Customers: Is It Worth the Investment?

Many distributors have historically been reluctant to invest in the latest technology for their own operations, much less their customers’.
Apr 29th, 2019

Softeon will be the first in the industry to combine advanced WES and WMS solutions in one integrated offering, providing customers new levels of productivity and agility.
Apr 4th, 2019

Softeon will be the first in the industry to combine advanced WES and WMS solutions in one integrated offering, providing customers new levels of productivity and agility.
Apr 4th, 2019

How technology is changing the roles of distribution leaders.
Mar 27th, 2019

Vendor Funds Management, taken as a managerial discipline, is one of the last bastions of un-mined profit in an aging sector.
Mar 20th, 2019

Previously driven by the automotive industry, sales of automation robots are spreading into a wider array of fields, including distribution.
Daniel Seeger
Mar 6th, 2019