The agreement Wednesday is to resolve a dispute over American tariffs on steel and aluminum as part of a framework for cooperation in wider areas. 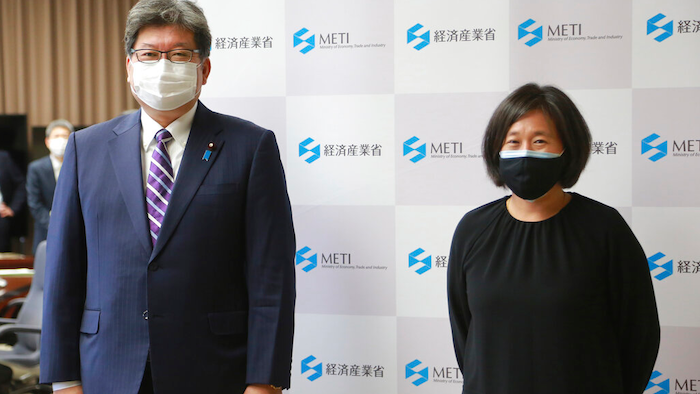 U.S. Trade Representative Katherine Tai, right, poses for a photo with her counterpart Koichi Hagiuda prior to their meeting in Tokyo on Nov. 17, 2021.
AP Photo/Koji Sasahara

TOKYO (AP) — U.S. Trade Representative Katharine Tai and Japan’s trade and industry minister agreed Wednesday to work to resolve a dispute over American tariffs on steel and aluminum as part of a framework for cooperation in wider areas.

A partnership announced earlier this week also will include working on a “Japan-U.S. common global agenda" for trade and cooperation in the Indo-Pacific region, Japan's Ministry of Economy, Trade and Industry said.

Tai and METI Minister Koichi Hagiuda's talks Wednesday followed a visit to Tokyo earlier in the week by Commerce Secretary Gina Raimondo. Tai and Hagiuda also agreed to set up a bilateral framework of talks among senior officials from the USTR and Japanese trade and foreign ministries to discuss trade issues and check “unfair practices related to third countries."

The statement did not name those countries but appeared to be alluding to China.

“For Japan and the United States, who share values of freedom, democracy and rule of law, leading the world economy, it’s essential that we strengthen our economic cooperative relationship," Hagiuda said.

The U.S. envoys have been visiting the region in a first obvious push by President Joe Biden's administration to soothe frictions left over from Donald Trump’s days in office.

“In affirming the U.S. commitment to the Indo-Pacific, President Biden has stressed that his vision seeks a region that is open, connected, prosperous, resilient and secure,” Tai said.

The effort to settle the tariffs issue comes as prices for steel have surged as economies shift into high gear after slowing during the pandemic.

At the same time, major economies have doubled down on trying to curb excess output in both industries.

METI said in a statement that the two sides had confirmed plans for negotiations on the tariffs issue and on addressing global excess production capacity.

It said Tai and Hagiuda also discussed preparations for ministerial level talks of the World Trade Organization that are due to begin Nov. 30 in Geneva.

Trump imposed extra tariffs of 25% on imports of steel and 10% on imports of aluminum, citing a need to protect American industries. That move angered U.S. allies in Japan, South Korea and Europe.

In meetings with Tai and Raimondo, Japanese officials said they were emphatic about having the tariffs problem resolved.

The U.S. and EU recently resolved their dispute over the punitive tariffs, with the U.S. agreeing to increase imports from the bloc. The deal helped forestall the imposition of retaliatory EU tariffs on billions of dollars worth of imports of American products such as Harley Davidson motorcycles and Kentucky bourbon. Those duties had been due to take effect in December.