One failed to deliver 2 million boxes of nitrile gloves worth $15.5 million. 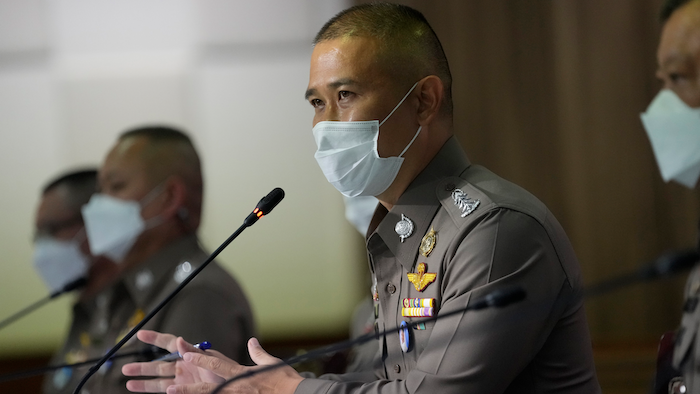 Commissioner of Central Investigation Bureau Jirabhob Bhuridej holds a press conference in Bangkok, Thailand, Wednesday, Nov. 3, 2021. The commissioner announced that they have arrested the head of a company suspected of cheating overseas buyers of medical rubber gloves during the coronavirus pandemic.
AP Photo/Sakchai Lalit

BANGKOK (AP) — Police in Thailand announced Wednesday the arrest of the head of a company suspected of cheating overseas buyers of millions of dollars they paid for undelivered medical rubber gloves during the coronavirus pandemic.

Thai authorities have been cracking down on a surge in rubber glove fraud, including the sale of substandard and used gloves.

The Thai company's CEO, Kampee Kampeerayannon, was arrested Tuesday on charges of fraud and posting false information online, he said. Kampee could not be contacted Wednesday and his company declined to comment.

In a separate case Tuesday, the Thai attorney-general’s office announced that a Thai employee of Paddy the Room Trading Co., Pipatpon Homjanya, was sentenced to four years in prison.

The company had exported millions of substandard and in some cases secondhand gloves to the United States which were packed without permission in boxes of a legitimate glove producer, Thai officials said.

Pipatpon was found guilty of producing and trading substandard medical gloves and medical equipment and of using the trademark of other companies without permission, Thai media reported.

The managing director of Paddy the Room, Luk-fei Yang Yang, identified by police and corporate records as Chinese, left Thailand before prosecutors were able to formally charge him in court.

The dealings of Paddy the Room attracted public attention in May when an American businessman who had filed a complaint about being cheated by the company was himself arrested.

Louis Ziskin and several associates were arrested for allegedly detaining a Taiwanese representative of another company, Collections Enterprise, to unsuccessfully pressure it to refund money after Paddy the Room's gloves proved to be low grade. Collections Enterprise had handled the payment for the deal.

Ziskin, who denies involvement in the alleged detention, had paid $2.7 million for gloves to be delivered to his Los Angeles-based company, AirQueen. He filed a complaint with Thai police in March against Paddy the Room.

Ziskin and his associates left Thailand when police failed to provide evidence in time to apply to a court to hold them for further investigation, police commissioner Jirabhob said.