Union workers would get wage increases of 10% in the first year. 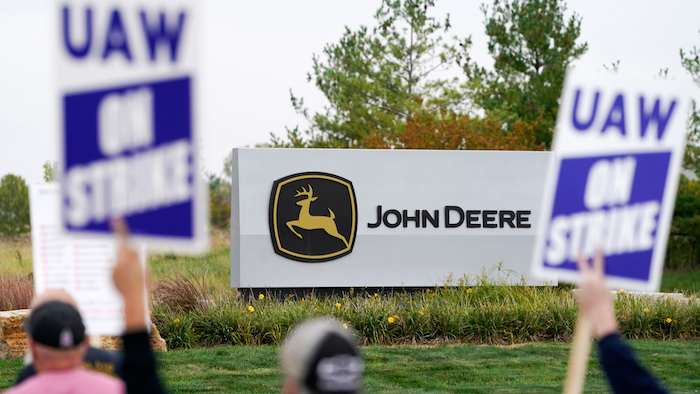 MOLINE, Ill. (AP) — Union workers at Deere & Co. would get wage increases of 10% in the first year and 5% each in the third and fifth years under a tentative contract reached between the farm-equipment maker and the United Auto Workers union.

The workers would get 3% lump sums in the second, fourth and sixth years of the deal. They would also get a ratification bonus of $8,500 and no changes in the cost of their health insurance, according to a summary of the agreement posted Sunday on the union website.

The company and the UAW reached a tentative agreement Saturday that would cover more than 10,000 workers at 12 Deere locations in Iowa, Illinois and Kansas. However, a strike that began Oct. 14 will continue while workers review the terms of the deal ahead of a ratification vote.

Union members previously rejected a proposed contract that included immediate 5% raises for some workers and 6% for others, and 3% raises in 2023 and 2025.

The Moline, Illinois-based company reported $4.7 billion in net income for the first nine months of its fiscal year, more than double the $2 billion of the same period a year earlier.