But it's not final yet. 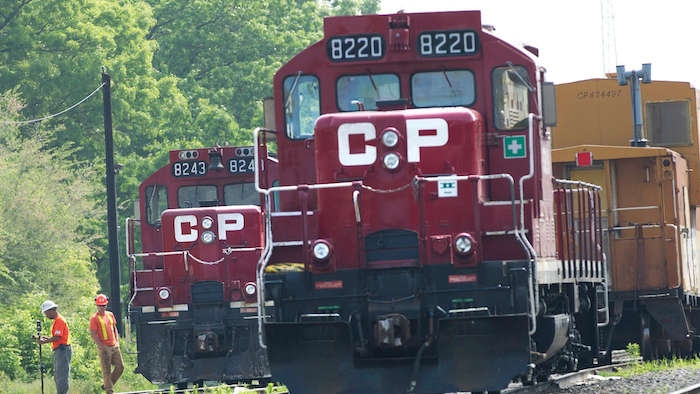 In this May 23, 2012, file photo, surveyors work next to Canadian Pacific Rail trains which are parked on the train tracks in Toronto. A planned shareholder vote on Canadian National's $33.6 billion offer has been delayed, Wednesday, Sept. 1, 2021, after regulators rejected a key part of the plan, so now Kansas City Southern can consider all of its options, including a competing $31 billion offer from Canadian Pacific Railway.
Nathan Denette/The Canadian Press via AP, File

KANSAS CITY, Mo. (AP) — Kansas City Southern has decided that a $31 billion bid from Canadian Pacific is the best of two offers on the table to buy the railroad.

The Kansas City, Missouri, company said in a statement Sunday that it has notified rival bidder Canadian National that it intends to terminate a merger agreement and make a deal with Canadian Pacific.

But it's not final yet. Canadian National still has five business days to negotiate amendments to its offer, and the Kansas City Southern board could determine that a revised CN offer is better.

In its own statement, Canadian National said it's evaluating its options. "CN will make carefully considered decisions in the interests of all CN shareholders and stakeholders and in line with our strategic priorities,” the railroad said.

Under the Canadian Pacific offer, each share of Kansas City Southern common stock would be exchanged for 2.884 CP shares and $90 in cash.

“We are pleased to reach this important milestone and again pursue this once-in-a-lifetime partnership,” said Canadian Pacific President and CEO Keith Creel.

Canadian National's bid was $33.6 billion, but regulators rejected a key part of the offer last month.

The Surface Transportation Board said Canadian National won’t be able to use a voting trust to acquire Kansas City Southern and then hold the railroad during the board’s lengthy review of the overall deal.

In contrast, regulators have already approved Canadian Pacific’s use of a voting trust because there are fewer competitive concerns about combining Canadian Pacific and Kansas City Southern.

Canadian Pacific set a deadline of Sunday for its offer. Both Canadian bids include a mix of cash and stock and the assumption of about $3.8 billion in Kansas City Southern debt.

It’s not yet clear whether Canadian National has any appetite to increase its bid because it is facing pressure from a major shareholder to abandon the deal. London-based investment firm TCI Fund — which owns about 5% of CN’s stock — maintains that CN should overhaul its board, get a new CEO and refocus its efforts on improving its own operations.

For more than two decades the railroad industry has been stable, with two railroads in the Western United States — BNSF and Union Pacific — two in the Eastern United States — CSX and Norfolk Southern — Kansas City Southern in the Midwest and the two Canadian railroads that serve part of the United States. Regulators have said that any merger involving two of the largest railroads generally needs to enhance competition and service the public interest to get approved.