Canadian National's CEO believes selling 70 of the 27,000 miles of track the two railroads own will help it get regulatory approval for the deal. 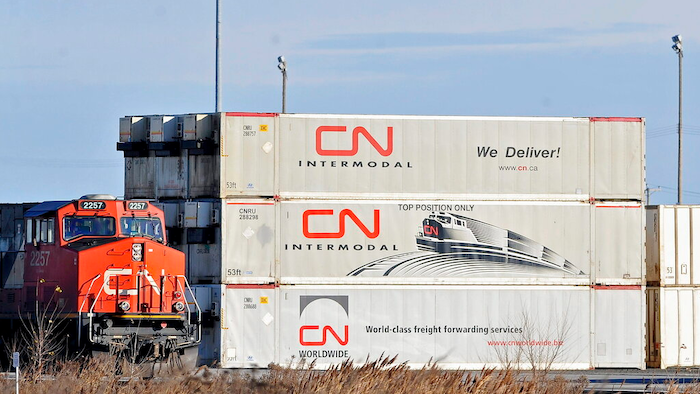 Canadian National CEO JJ Ruest said he believes selling 70 of the 27,000 miles of track the two railroads own will help it get regulatory approval for the deal. The railroads resubmitted their application for initial approval of the deal on Wednesday and tried to address questions the Surface Transportation Board raised last week.

On Friday, Canadian National won the bidding war for Kansas City Southern over a competing $25 billion bid from Canadian Pacific railroad, but CP said it plans to continue pursuing regulatory approval for its combination with Kansas City Southern so it will be prepared if the CN deal fails to get approval.

Canadian National said the rail line that would be sold connecting Baton Rouge and New Orleans in Louisiana is the only area where the two companies directly overlap. Yet Canadian Pacific maintains that competition will be hurt across much of central United States because Canadian National and Kansas City Southern both operate parallel rail lines that connect the Midwest to the Gulf Coast. Canadian Pacific said its proposed combined rail network would also divert more traffic around Chicago while CN's plan would send more railcars through that already congested area.

Canadian National plans to set up a voting trust that would acquire Kansas City Southern and hold the railroad during the Surface Transportation Board's lengthy review of the overall deal. Last week, regulators rejected CN's initial plan for that voting trust because at that point the railroads hadn't submitted a detailed copy of their merger agreement, but the STB said it would take a cautious approach to approving the plan. The board also questioned whether the level of debt Canadian National plans to take on to buy Kansas City Southern would undermine the financial stability of the railroad.

“We believe our early commitment to eliminating the minimal rail overlap and to laying out the case for a CN-KCS combination should allow the STB to approve our voting trust,” Ruest said.

CN tried to address regulators' concerns in its latest application. Ruest said he believes CN will be able to meet the board's standard and demonstrate that its acquisition serves the public interest. He also said CN would remain in a strong financial position because it has suspended stock repurchases and plans to pay down debt quickly if it's allowed to acquire Kansas City Southern.

Ruest said Canadian National would be able to address any other concerns about the deal later in the review process after the voting trust is approved.

The Surface Transportation Board hasn’t approved any major railroad mergers since the 1990s, so its current merger rules haven’t been tested. It has generally said that any deal involving one of the nation’s six largest railroads needs to enhance competition and serve the public interest to get approved. The board has also said it would consider whether any deal would destabilize the industry and prompt additional mergers.

Canadian Pacific already received approval for its plan to use a voting trust to acquire Kansas City Southern before KCS decided to accept Canadian National's offer. CP CEO Keith Creel reiterated Wednesday that he still believes his offer for Kansas City Southern is the better one, even though it is lower, because it has a better chance of getting regulatory approval. CP has refused to increase its bid.

Canadian National said in its application for approval that CP's continued pursuit of the deal “is a blatant attempt to have the board force KCS into an undesired merger.”