The company is the world's largest rubber glove maker. 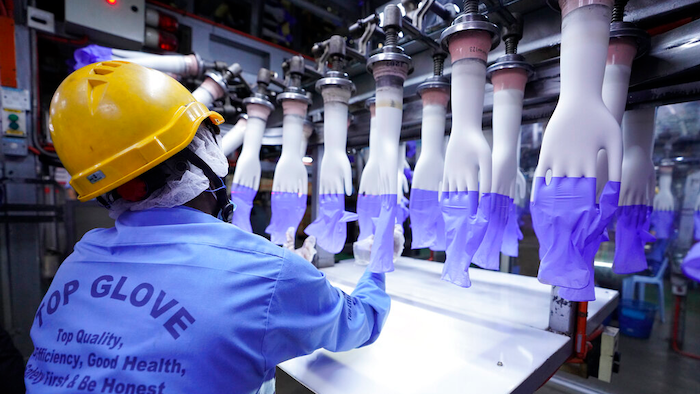 A worker inspects disposable gloves at the Top Glove factory in Shah Alam on the outskirts of Kuala Lumpur, Malaysia.
Associated Press

KUALA LUMPUR, Malaysia (AP) — Malaysia's Top Glove Corp., the world's largest rubber glove maker, said Wednesday it expects a shortage of gloves over the next three years as it reported a record quarterly profit fueled by the coronavirus pandemic.

Top Glove said its net profit grew 21-fold from a year earlier to 2.4 billion ringgit ($590 million) in the three months through November, while revenue almost quadrupled to 4.76 billion ringgit ($1.17 billion).

It said the deployment of vaccines next year will not hurt glove demand, since it will take time for them to become widely available and people administering the shots will need protective gear.

“We do not see a slowdown ... even with a vaccine, we expect (glove) usage to be stronger than the pre-COVID era due to an increase in healthcare and hygiene awareness," managing director Lee Kim Meow said in an online news conference.

The company projected glove demand will outstrip supply over the next three years, jumping 25% in 2021 and another 15% annually for the following two years. Growth was about 10% a year in the pre-pandemic period.

Lee said Top Glove, which produces about a quarter of the global supply or 90 billion gloves a year, has earmarked 10 billion ringgit ($2.46 billion) to expand its capacity by 100 billion pieces over five years.

Lee also said the company expects to resolve a dispute with U.S. Customs and Border Protection, which banned imports from two of its subsidiaries over forced labor concerns. The ban has hurt sales to the U.S., but the company said this was offset by rising demand in Europe and Asia.

Chairman Lim Wee Chai said Top Glove, which was forced to shutter 28 factories in a Malaysian suburb in stages last month after 5,147 workers tested positive for the coronavirus, has reopened seven of the facilities. It expects to resume full operations in two to three weeks, he said.

The area where the Top Glove factories and workers’ hostels are located was one of the top virus clusters in the country, but the numbers of cases have eased. Malaysia has reported a total of 76,265 cases, including 393 deaths.