Home Depot Separates Itself From Retail Crowd In 2Q

Coming off its announced $1.63 billion purchase of Interline Brands, Home Depot reported a 5.7 percent yearly gain in U.S. sales, and upped its 2015 guidance. 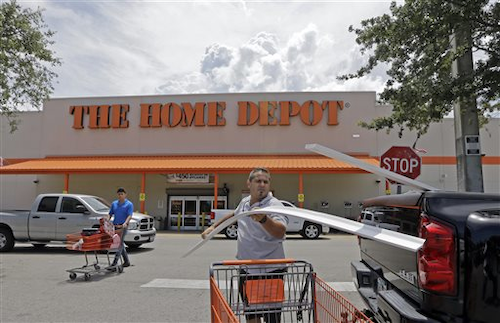 The world's biggest home improvement retailer boosted its annual outlook for a second time this year, underscoring a transformation in the way Americans spend money.

Department stores, also reporting earnings this month, have largely been routed. The wandering eye of shoppers increasingly falls on the home, cars and electronics, rather than shoes, skirts and shirts.

On the same day that Home Depot upped its guidance, Wal-Mart reduced its expectations after missing second-quarter profit projections.

U.S. data shows that rising retail sales are being driven by spending on furniture, cars and things like sporting goods.

Home Depot's customers are walking through its doors more often, and they're spending more once they're inside.

The average receipt during the quarter was $59.42, a 1.7 percent increase, and the number of transactions rose 2.6 percent.

Sales at stores open at least a year, a key indicator of a retailer's health, rose 4.2 percent. In the U.S., sales gained 5.7 percent.

A healing real estate market has added fuel for Home Depot, whose shares appeared to be heading toward an all-time high before the opening bell Tuesday.

Aided by steady job gains and low mortgage rates, sales of new and existing homes have climbed in the first half of 2015. Purchases of new homes are 21.2 percent higher through the first six months of this year than the same period in 2014. Existing homes are selling at an annual rate of 5.49 million, the fastest pace since February 2007, according to the National Association of Realtors.

Home Depot's second-quarter revenue increased to $24.83 billion from $23.81 billion. That's better than the $24.66 billion analysts had expected, according to Zacks Investment Research, and it was the sixth consecutive quarter of sales growth for the Atlanta company.

"We saw balanced growth across our business resulting from strength in the core of the store as well as the continued recovery of the U.S. housing market," Chairman and CEO Craig Menear said in a printed statement.

For the three months ended Aug. 2, Home Depot earned $2.23 billion, or $1.73 per share. Stripping out the costs of a data breach the company suffered last year and a gain on the sale of the remaining part of its equity ownership in HD Supply Holdings Inc., earnings were $1.71 per share, a penny better than Wall Street had expected. It was also better than the $2.05 billion, or $1.52 per share, that Home Depot reported last year during the same period.

Same-store sales for the year are expected to rise about 4.1 percent to 4.9 percent, better than earlier projections of between 4 percent and 4.6 percent.